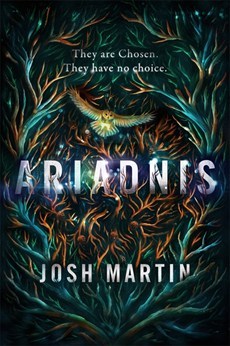 Joomia and Aula are Chosen. They will never be normal. They can never be free.

On the last island on Erthe, Chosen Ones are destined to enter Ariadnis on the day they turn eighteen. There, they must undertake a mysterious and deadly challenge. For Joomia and Aula, this means competing against each other, to end the war that has seethed between their cities for nine generations.

This book did not go in the direction that I expected. And I loved it. The synopsis suggests that it will be focused around a competition – this “mysterious and deadly challenge” – and whilst this is a key point, Ariadnis isn’t really about the challenge. The book opens on the day that Aula and Joomia turn seventeen, a full year to go before they must undertake the challenge. It is an event that is built up to, looming in the distance, but not one that is the action focus of the novel, per se. This is by no means a problem, in fact I rather thought it enhanced the plot, but the synopsis is a little misleading. Further, the two cities Metis and Athenas are not exactly at war – there is animosity, yes, but not war.
So, you ask, if it is not about a competition or war, then what is Ariadnis about? It is about love, strength, duty, betrayal, family, and growing into yourself. There is a lot of focus on relationships, but this is not at the expense of the plot.

“Yeah. But she was so proud of you. You think Ashir’s pride could ever die? She reaches up with one silky wrinkled hand and brushes Etain’s coarse hair. “Sing, my darling girl. Sing like yer heart’s gonna come outta yer mouth”

(this scene made me tear up a little)
Aula lives in Athenas, the city of industry and technology that thrives above the cliff, with her best friend, mechanic and daughter of a prophet, Etain. Joomia resides in Metis, the city of trees and nature built into the nine trees below the cliff, with her adopted brother (of sorts) Taurus. They are their peoples’ Chosen Ones, marked out by a tattoo to compete on their eighteenth birthdays for the book of the Wise One that contains all the knowledge in the universe. With this their city may subsume the other and their ideals rule the planet of Erthe.
There is a lack of information at the start of the novel, which is part of the reason this is not a five star book. I was confused about what exactly was happening, what the Wise One was, why there are Chosen Ones, why they were competing, for longer than I should have been. But soon enough the explanations start to roll in and the bizarre yet beautiful ideas behind Ariadnis come to the fore. The writing itself is lovely; there is a touch of slang to give it character, the girls both have distinct voices and personalities, and Martin manages to utilise time skips really well (which is a hard thing to do!).

This forest is so still. I know the trees of Metis are old, but these are something else: old in the way that comes before memory, like elements: rain or clouds or earth

Aula is strong, bull-headed with anger in her veins. Her powers revolve around strength and speed. Joomia is more meek, unsure of herself, and the more obedient one of the two. Her powers are to do with nature. I don’t want to give too much away here, so I won’t elaborate, but both characters are beautifully written and have strong, compelling relationships with the rest of the cast.

Aula’s powers reflect her city’s values – the impossible speed and strength of industry, the reckless, ruthless spirit of human command. Whereas you – you reflect that slow growth of nature, naturality. Quiet, but dangerous to underestimate.

There are Nadrik and Mathilde, the two “mentors”, as well as Etain and Taurus, and a number of other important side characters including Ashir, Etain’s mother, and Abe, whose mind has been torn apart by prophecy. Through these characters Aula and Joomia develop and grow into their responsibilities as Chosen Ones. Joomia’s arc was my favourite; I cheered her transformation from someone hesitant, afraid of herself and what she could do, into an adult who knew what she was.

Overall, Ariadnis is a lovely novel that went in an entirely different direction to the one I expected. It is crafted with delightful prose, charming (yet sometimes annoying) characters, and an excellent plot full of twists and turns. Its flaws include a lack of world building at the start, and even by the end I still had some questions (I still don’t really get why they had to leave Earth), but I would certainly recommend it. The ending is perfectly wrapped up for a standalone novel, but also has room for a sequel depending on what the author plans.
My thanks to Netgalley and Josh Martin, the author, for an ARC of this book.