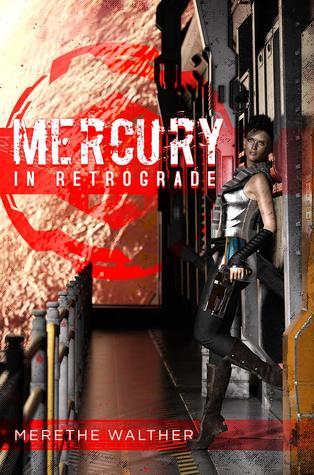 Aralyn stared up at the stars above them. Once a place that had held untold fortune and adventure, she’d recalled the delight at setting out on her first run; tightness and happiness and fear warring in her belly.

Aralyn Solari spent the last three years of her life in the galaxy’s worst prison after a compromised run ruined her flawless smuggling record five years prior. Now that she’s free and has the promise of an easy job with a ridiculously large pay off, her last gig should be a cinch. As long as she follows the runner’s standard, anyway: get in, get out, get paid.

* * * *
4 / 5
What an unexpected gem of a book! I requested this book on Netgalley because of the plot, but when I came to read it was put off (stupidly) by the cover. But I am so glad I read this. Mercury in Retrograde has unpredictable action, unbelievable heists, and an unlikely crew of rag-tag criminals that I grew to love. It’s funny, delightful, made my heart race in parts, and tackled some difficult issues like human trafficking and slavery.

We are thrown straight into the action. Aralyn Solari fresh (and battered) from a stint in the galaxy’s worst prison, Tartarys, steps off her spaceship only to be arrested by her ex-boyfriend for being a known runner of illegal goods. Shortly after being cleared from custody, Aralyn is set up and arrested for one of the most illegal crimes in the solar system: orachal smuggling. Orachal is a drug used for subduing people for human trafficking. And this is just the beginning of Aralyn’s bad fortune; her story winds its way across the solar system, following the trail of a woman who seems to want her dead, an encrypted tablet with vital information in a court case, and a team that really does not know when to quit.

Helen nodded. “Foolish sheep think … they think a wolf won’t eat them if he’s fed, but the wolf has many mouths to feed. Always hungry.”

Aralyn is bold, gutsy, and handy with antique Earth guns. She’s also broken: three years in Tartarys has taken its toll on her psychologically, and her heart is broken by Caden Madigan, ex-partner and, well, ex-partner-in-crime who seems to have flipped sides from law breaker to law enforcer. I liked Aralyn’s sensitive side; she’s cool in a crisis and keeps a level-head most of the time, but she’s also only human, and who wouldn’t break down after being chased from planet to planet? She’s also hilarious and not in that horrendously snarky manner that female main characters seem to be nowadays. Aralyn is genuinely amusing.

“Or my ship,” said Kita. “I’ve got supplies on it. I guess we could part ways there. I can give some money, if you want.” “You got caught selling fake creds…”

The rest of the crew is made up of amateur hacker Kita, Caden, and Kita’s ex-lover Riordan. Caden is a bit of a flat character to be honest, the weakest person in the cast in my opinion. He’s got an interesting backstory, but that’s about all he’s got going for him. Otherwise I found him arrogant, stubborn and overly protective. There’s not wanting someone you care about to go into danger, a very reasonable reaction, and being stupid about it.

What I did like was that Aralyn and Caden already had history. There’s no chance of instalove, just the slow rekindling of an old flame as two people, both of which feel uncertain and betrayed, learn to trust each other again whilst realising that they can’t regain the relationship of their youth.

The plot is the strongest point of this book. There’s a sensitive and moral exploration of slavery, touching on a very important point about how we can be so apathetic in the face of what we clearly perceive to be moral injustices. But there’s also lots of fun heists, prison breakouts, blackmailing, double-crossing and gun fights. There’s also spaceships and hacking. Overall, Mercury in Retrograde is a fast-paced sci-fi novel with a dynamic cast that I definitely recommend people try.
My thanks to Netgalley and the publisher for a copy of this book.