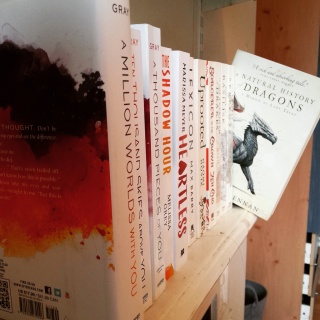 Shelfie, February ’17
I use the word “shelfie” with a sense of irony, but also because calling it a “to be read photo experience” is long and unwieldy, and I’m already using “reading round up” for books that I’ve actually read. So even though this might more accurately be described as “pictures of stacks of books that I own and intend to read sometime soon”, I’m sticking with shelfie.
The above photo is actually composed of books I’ve mostly already read, but I really am quite proud of the photography and thought it would make a nice header! I have no photography experience in the slightest and use my camera phone, so starting my own book blogger Instagram has been quite an interesting experience, to say the least. Remember you can check out the rest of my photographic brilliance here, on Instagram. If you are curious, the picture has:
So, having had a birthday recently and received lots of books, as well as starting myself up on Netgalley, I’ve been seeing a massive rise in the books I own that I’ve yet to read. This is despite reading more than I’ve done in a long time (18 books so far this year, at time of writing this)! I’m hoping that cataloguing them here might help me sort out what I want to read next, as well as introduce people to some new books. 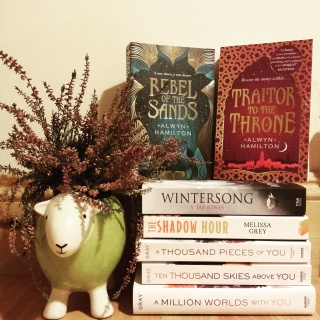 Also featuring a heather plant in the sheep pot I got when I visited the Lake District. I took a bit of a gamble and bought both of Hamilton’s books at the same time, despite not having read anything else by him on the basis that Rebel of the Sands got some rave reviews. If nothing else, they’ll look lovely on my shelf – all that sparkly gold! Wintersong is a Labyrinth retelling which is being lauded around at the moment. I also have fond memories of the film and am lured in by the promise that Wintersong will be at the more adult end of the YA spectrum.
The Shadow Hour is the sequel to The Girl At Midnight, which I read almost two years ago now, but have vaguely fond recollections of. It focuses on Echo, a runaway pickpocket who finds a home with a non-humanoid race, the Avicen, and her quest to steal the Firebird. An interesting coincidence since the next books on my list is Gray’s Firebird trilogy. I’ve actually already read A Thousand Pieces of You, but that was almost exactly two years ago so I think I’m due a refresher. Marguerite must chase her father’s killer (and her love interest) through multiple dimensions. These books also have the most gorgeous covers!

An Ember in the Ashes is another reread in preparation for A Torch Against The Night – I thought I’d be alright without rereading, but after seeing other people’s statuses, I’ve realised I have no recollection of any of the characters (who is Helene? I can’t remember!). Heartless has been getting a mixed bag of reviews, but I managed to pick this one up quite cheaply so I thought I’d give it a shot. The same goes for Three Dark Crowns, the tale of three princesses and one throne. Also apparently there’s three different covers for Three Dark Crowns, one for each princess, but I’ve never seen anyone with any other colour than red?
Wolf by Wolf is a historical fiction about a girl trying to kill Hitler. There’s also motorcycles involved. Then comes Kagawa’s Talon, a book aimed at slightly younger readers than I, but its about dragons so. Then there’s another younger read – the latest book in John Flanagan’s Ranger’s Apprentice series. I’ve been reading them since I was twelve and I’m not about to stop now. Will and Halt are characters very dear to my heart, and they are fun books I recommend to anyone who is reading this that is either in their younger teenage years or still fosters dreams of being Legolas. Lastly, Aerie is the sequel to Magonia, a rather bizarre book about bird people. 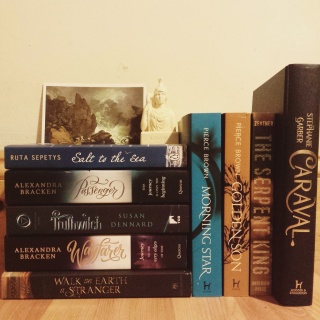 Phew. This is the last picture, I promise. I don’t normally read historical fiction, but I picked up Salt to the Sea, the tale of four refugees travelling across Prussia, and Walk on Earth a Stranger, about the American gold rush with magical elements, on a whim. The same goes for Zentner’s The Serpent King, which is also a little out of my reading comfort zone. But as well as trying to read more books this year, I’m also trying to venture out to different types of books to broaden my horizons. But a return to more familiar reading ground is Truthwitch, featuring Safi the exceedingly rare truthwitch who is running from those who desire her power.
I’ve read Bracken’s The Darkest Minds and enjoyed it, so I picked up her new books Passenger and Wayfarer about time travellers voyaging across centuries and continents in search of a stolen object. Then there’s Pierce Brown’s continuations of Red Rising (you can read my review of it here) which I thoroughly recommend – one of my favourite reads of 2016. So I can’t wait to see where Brown takes the next book. The cover art of Golden Son is simply delicious. Lastly, there’s my current read in progress, the infamous Caraval. I loved The Night Circus, so if Caraval can be anything like it I will be content.
Well that’s it for my reading material. What are you reading at the moment?