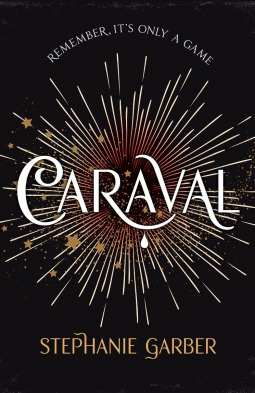 So while we want you to be swept away, be careful of being swept too far. Dreams that come true can be beautiful, but they can also turn into nightmares when people won’t wake up

Scarlett has never left the tiny isle of Trisda, pining from afar for the wonder of Caraval, a once-a-year week-long performance where the audience participates in the show.
Caraval is Magic. Mystery. Adventure. And for Scarlett and her beloved sister Tella it represents freedom and an escape from their ruthless, abusive father.
When the sisters’ long-awaited invitations to Caraval finally arrive, it seems their dreams have come true. But no sooner have they arrived than Tella vanishes, kidnapped by the show’s mastermind organiser, Legend.

Caraval is a highly acclaimed YA novel, which made me approach it as cautiously as one would (I imagine) approach a cornered wild animal. Whilst it inevitably fell short of all of the hype, it was still an outstanding debut by Stephanie Garber. This book is about Scarlett, a young woman who her never left her island, trying to survive under the thumb of her abusive father by agreeing to marry a man she has never met. Yet Scarlett somehow never lost the wonder of a child. Trickery follows her as she goes to compete in the yearly game hosted by Legend, Master of Caraval, only to find that not all is as it seems. Starting with when her beloved sister Donatella goes missing.
Scarlett is a girl who lives on a knife’s edge, trying to keep her sister safe. I admired her a lot and empathised with her difficult situation and feelings of fear. Tella is the risky sibling, leaping before she looks. To counterbalance this, Scarlett never leaps at all. At least not until she is thrust unwillingly into the world of the game, where she undergoes a wonderful character arc. There’s a delightful moment when Scarlett finally stops running from her fears, from the people that scare her, from the shadows in the dark, and literally picks up a poker and ties a man to a bed. From there, Scarlett becomes bold enough to choose the future that she wants, and I cheered for her.

Two people choosing to give tiny vulnerable parts of themselves to each other. That’s what Scarlett wanted. That’s what she deserved.

Tella doesn’t get a whole lot of page time, so we mostly view her through the eyes of Scarlett, who understandably has complicated feelings towards her sibling. She loves her but finds Tella selfish and irresponsible (which frankly I agree with, mostly I didn’t much like Tella), and Scarlett sometimes finds it difficult to square these emotions. The other main character is Julian, devilishly attractive and a mysterious sailor. I wasn’t really sure how I felt about Julian. Everyone is viewed through Scarlett’s eyes (even though the book is in third person), so much so that it makes it difficult to know what you yourself think about other characters as you are so immersed in how Scarlett feels.

She was done allowing her fear to make her weaker, to eat away at the meat on her bones until she could do nothing but whimper and watch

And what Caraval did best was make me feel. I had lots of genuinely emotional reactions to this book, starting from when the father made his first despicable appearance to the closing pages. I wanted to fight the father. I wanted to scream at Tella. I wanted to punch the stupid count and then throw him off a balcony. I wanted to grab Scarlett and carry her away to somewhere safe and certain. Caraval made my heart race and my emotions flare. 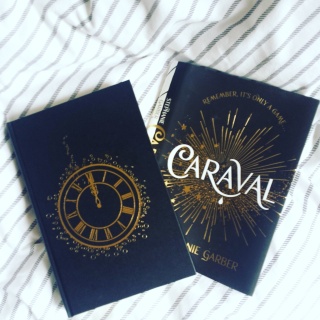 This was the cover I received (out of four possible designs), which I thought was absolutely gorgeous.

At this point it seems obvious to make comparisons to The Night Circus, a book which I read and loved a number of years ago, also loosely based around the idea of a circus, a competition, and a romance. They have similar flowery types of prose, though I think at times Caraval goes overboard with this. At the forefront of both books is the idea of deception, that what you see and believe isn’t real, and both play off of this idea. So if you found The Night Circus frustrating to read, I wouldn’t recommend you pick Caraval up. I think the key difference between them is that when I read The Night Circus I was in awe, I was enthralled and enticed by the magic and the beauty of the circus. It truly made me believe that the world was magical. When I read Caraval, I was mostly weirded out.

“People don’t expect the truth here,” the girl went on, undeterred. “They don’t want it either. A lot of people here don’t expect to win the wish; they come here for an adventure. You might as well give them one”

Instead of being enticing, the game around which Caraval is based seems dangerous, alarming, and not fun at all. It was set up in the initial pages of the book to be delightfully magical, yet only ever appeared to be the complete opposite of a fun time. What it was was mysterious and intriguing, with all sorts of twists and turns; parts were more psychological thriller than magical. That is not to say that this is bad, just that it was neither what I expected or wanted from Caraval. I constantly felt off-guard when reading this, always having thought I had been clever and figured out the twist, only for something different to be happening. Where the book made fantastic use of my feelings of uncertainty was the last 100 pages. These are the real showstoppers of the novel. I really felt connected to Scarlett: I didn’t know who to trust, who to believe or what was going to happen next. It was wonderful.

Some of the pages have gorgeous illustrations

I was surprised to discover that this book is slated to have a sequel. Right up until literally the last couple of pages, Garber could have reasonably cleanly wrapped this up as a standalone book. Instead she chooses to add a weird little cliffhanger to the end, which I wasn’t really sure how to respond to. This was one of the small handful of issues I had with Caraval – the very last bit of the ending felt tacked on in order to ensure a sequel. Another issue was the middle third of the book. This is where I had hoped the setting would shine, that I would be wrapped in wonder and delight of all things magical and mysterious. Unfortunately, that didn’t really happen. The middle is wedged between the dramatic start and page turning end and just seems rather slow: Scarlett worries about her sister, Scarlett experiences a weirdly written sexual awakening, Scarlett worries about Julian, there are roses and pretty dresses. Its just a bit dull.
The other divisive factor is the prose. Scarlett has synesthesia; she sees colours when she feels strong emotions. This is a real thing, so that wasn’t a problem, it just resulted in lots of sentences like this:

The urgent red of coals. The eager green of new grass buds. The frenzied yellow of a flapping bird’s feathers.

Which, whilst lovely at first, becomes a bit grating the eighteenth time Garber writes something along the lines of “she was feeling sage-shaded colors of suspicion”. These sentences involving emotions are only the springboard into Garber’s exploration of weirder and more metaphorical writing:

it tasted like the moment before night gives birth to morning; it was the end of one thing and the beginning of something else all wrapped together

Don’t get me wrong, a lot of the time I found the writing beautiful. But the third time we are told that Julian “tastes like midnight and wind” it stops being evocative and starts sounding a little bit ridiculous. What Garber did do which was very lovely was to start the book with a collection of letters written over the years by Scarlett to the Master of Caraval, Legend. I love epistolary formats and thought this was delightful.
Caraval is a delightful book. If you enjoyed The Night Circus I would recommend this, with the caveat that it is less magical but has a lot more twists. It has charming (and monstrous) characters and strong messages about love, commitment, and becoming strong and discovering who you are and what you want. It’s also a gorgeously illustrated book to boot.