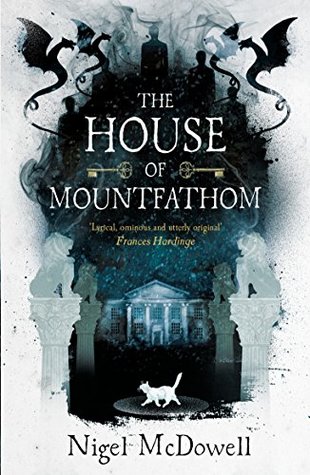 Luke Mountfathom knows he is special and odd. He is told so by everyone he knows. His parents are special and odd too – they are the keepers of the House of Mountfathom, a magnificent stately home where the wrong door could take you to a far away land, and strange animals appear to stalk the grounds at midnight. The house is his home – but it is also the headquarters of the Driochta, a magic-weaving group of poets, artists, politicians and activists charged with keeping the peace in Ireland. They have many powers – have mastered Mirror-Predicting and Smoke-Summoning and Storm-Breaching – and a final ability: that of Mogrifying; taking on a unique animal form.

I was hesitant to assign this book a rating, given that it felt unfinished, more akin to a draft than a completed novel. Upon learning that The House of Mountfathom is to be published posthumously (and so possibly never was finished to the satisfaction of the author), I have decided to leave my review unrated. The House of Mountfathom is a tale of magical realism, of a living house, of a family, and of a war.

“Why can we not believe, for example, that we could return to our past? Do we not do it all the time? Do we not at times become utterly lost in memory?”

Luke Mountfathom is the sole child of Lord and Lady Mountfathom. He is quiet (he is often mistaken for being mute) and studious, but also childish and loves his parents and cousins. He keeps a collection of animal skeletons. He also has a gift and an aptitude for magic. Luke is a rather plain character, he isn’t really likeable or dislikeable because there isn’t much to dislike. I also have no idea what he looks like. The book opens with his Naming Ceremony, which is promptly interrupted by a messenger bearing a warning and a threat: the government and magic will not keep the nobility safe in their houses.
The problem with The House of Mountfathom is that it is entirely confusing and thus makes for a frustrating read. As you continue, elements of the world and the plot become clearer, but not altogether so. Luke’s parents are members of the Driochta, a group of magical shapeshifters who serve as diplomats between the government and everyone else. At first I was under the impression that they were the only ones who could do magic, then it becomes clear that this is not so. Some people are magic and others are not, there is never any clear distinction made.

“The day this land chooses battle and blood over discussion will be a sorry day for Magic, and a sorrier day for all in Ireland”

The book is also set in Ireland, during a time of unrest. I’m not sure whether or not this setting is supposed to be entirely fictional, or a reflection of the Irish Troubles: there’s soldiers present at the start, who are “fighting for the revolution”.

“It is when we, the past keepers and custodians of this ancient House, decide to leave it that you will begin to worry. When the past has no place in the world, that is when things begin to burn”

Despite the narrative flaws, The House of Mountfathom is a book full of wonder and joy. The house itself is alive, the wallpaper moves and plants grow from its foundations. The staircase can become unending and on the secret floor, the floor where Luke is not allowed, there is a door that leads into the Gloaming, the unknown. I was also rather fond of the prose, though I’m aware that might be a divisive preference. It was sort of old-fashioned and antiquated, I suppose, though I rather thought it flowed nicely and reflected the mood of the setting and plot rather well. It also has a handful of gorgeous illustrations inside, as well as a beautiful front cover.
Overall, The House of Mountfathom is a curious read. It is slow and melodic and beautiful upon occasion, but also confusing and dull in parts. It feels unfinished, which is a shame, because there is a lot of potential in this story.
My thanks to Netgalley and the publisher for an ARC of this book. My respects to the author, Nigel McDowell