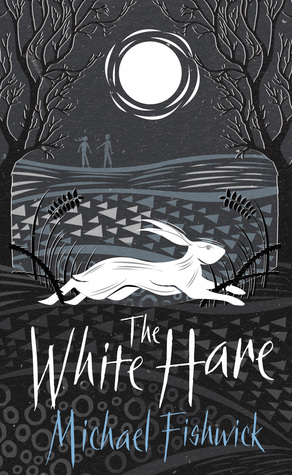 “People don’t move very far, Robbie, societies don’t change, and their stories, and their legends, never die, and because we can’t see things doesn’t mean they aren’t there”

A lost boy. A dead girl, and one who is left behind.
Robbie doesn’t want anything more to do with death, but life in a village full of whispers and secrets can’t make things the way they were.
When the white hare appears, magical and fleet in the silvery moonlight, she leads them all into a legend, a chase, a hunt. But who is the hunter and who the hunted?

I felt the same way reading The White Hare as I did when reading Neil Gaiman’s The Ocean at the End of the Lane: like I was reading something in a weird hazy dream, knowing that the book was good but not quite grasping it. It was like experiencing childhood again, that weird blur of reality and belief that the world is more magical than it really is. I have absolutely no doubt that anyone who enjoyed The Ocean at the End of the Lane or A Monster Calls will absolutely love this; Fishwick has nailed that interweaving of narrative threads about family, love, fear, loss, growing up, and wondering who you are and how you fit into the world.

He and his dad had this in common, at least. The land was claiming him. There was a life to be had here

Fourteen year old Robbie, suffering from the loss of his mother and annoyance at his father bringing a new woman, Sheila, and her children into his life, commits arson. His father decides the best move is to take the new family to the countryside, to the village where he grew up, hoping that this will rejuvenate Robbie but also seeking peace and closure for himself. Robbie befriends Mags, an older and parent-unapproved girl with a secret and a past that she can’t leave behind. I really loved Robbie. I felt that Fishwick really pinned down the character of this hurting young man; Robbie is hurting, yes, but (despite the arson) is not aggressive or unlikeable, and he gets a lovely healing arc.

“The brutality of love. The desperation, the tide of misery that sweeps through you when you cannot have the one you want, the pain that’s left behind that you can’t endure, the callousness of the heart and its tenderness and frailty”

A well as being about Robbie and his loss, The White Hare is about a legend. When a woman takes her own life because of a lover, she might come back as a white hare, beautiful and elusive and hunted. Robbie wanders into Mag’s story, one of love and loss and a white hare that she can’t put out of her mind. The reader, like Robbie, is confused by what is happening, there’s always this sense permeating the narrative that everything is not quite as it seems, that the truth is just out of your grasp.

He couldn’t see the stars so much because of the moonlight, you’d think they’d all fallen to earth, a little galaxy of orange streetlights sprinkled over the plain

So why wasn’t this book a higher rating for me, you ask? Frankly I was about 80% of the way into The White Hare before I started to get the point of the book. This was absolutely my fault, and it was the same problem I had with Gaiman’s book: I was too busy trying to figure out what was ‘real’ and what wasn’t to just go with the flow and appreciate the book. I also thought some of the secondary characters, like Sheila, her daughters, and the Strickland brothers weren’t fully developed: Shelia was the standard stepmum to whom Robbie felt very negatively, understandably, but who never really did anything that deserved it, and I never really understood the motives of the Stricklands.
I definitely recommend The White Hare for anyone looking for a book about growing up mixed with delightful legends and a hint of magic hanging in the air. Fishwick writes in lovely prose and Robbie is a lovable main character.