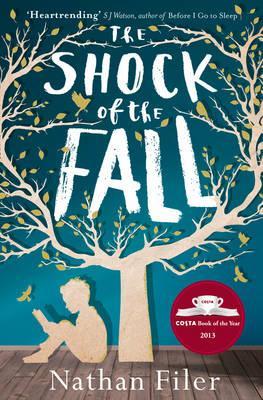 ‘I’ll tell you what happened because it will be a good way to introduce my brother. His name’s Simon. I think you’re going to like him. I really do. But in a couple of pages he’ll be dead. And he was never the same after that.’

* *
2 / 5
This is a good book. It’s an important book. It just isn’t a me book. I don’t often read contemporary, but I picked this up thinking it was going to be a bit like We Are All Completely Beside Ourselves, which I really enjoyed. It wasn’t like that at all, other than in the fact that both books are a touch bizarre in terms of format and timeline. The Shock of the Fall follows Matthew before and after the death of his brother Simon, as he becomes more schizophrenic.
The first problem is that I didn’t really follow the timeline. The book jumps between formats (letters, typewritten pages, normal text) which is quite cool, but also flips between memory and forwards and backwards in time, sometimes during a single scene. I just couldn’t follow it. I’m still not even sure how the book ends because at the end Matthew is eighteen, but at one point he is definitely nineteen. I couldn’t tell if he was getting better or worse, because the timeline was so twisted (maybe that was the point?). I think I probably should have taken notes.

“Some madness doesn’t act mad to begin with, sometimes it will knock politely at the door, and when you let it in, it’ll simply sit in the corner without a fuss – and grow.”

Then there’s the mystery of what happens to his brother. I didn’t particularly care because I sort of roughly figured out what had happened, and the “mystery” was secondary to the main plot: following Matthew. Matthew was a really interesting and important character. There’s a lot of important and impactful exploration of grief and loss, but I also didn’t really care about Simon. This book was a page turner, but not because I was particularly invested in what was happening. It was easy to read, the writing style was casual and chatty, there were a few pictures.
What did I like, then? Well, I think talking frankly about mental illness is very important, which this book did. I also liked that it was set in Bristol, where I live, so it was really easy for me to picture Matthew and his environment. The Shock of the Fall did make me really feel. Sorrow for Simon and his circumstance, and for his family (particularly his Nanny Noo). I also really loved the cover and the title.
I absolutely think that this book will work for a lot of people. Unfortunately, I wasn’t one of them.