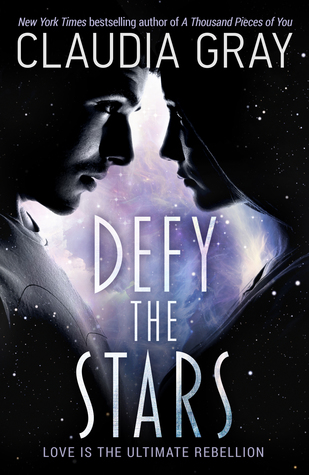 Make a choice. Assert your own will. It’s the first step toward being something more than a machine. Find out what you might become.

When Noemi meets Abel, one of Earth’s robotic mech warriors, she realises that Abel himself may provide the key to Genesis’ salvation. Abel is bound by his programming to obey her – even though her plan could result in his destruction. Stranded together in space, they go on a whirlwind adventure through Earth’s various colony worlds, alongside the countless Vagabonds who have given up planetary life altogether and sail forever between the stars. Each step brings them closer – both to each other and to the terrible decision Noemi will have to make about her world’s fate, and Abel’s.
Read my review of the next book in this series: Defy the Worlds

Woah. I picked this up because I had fondly read A Thousand Pieces of You by Claudia Gray and thought hey, great, she’s writing something new – and it has robots in space, so why not? In Defy the Stars Gray shows the same depth of imagination as she did in the Firebird Trilogy, creating an equally vivid and inspired universe. Noemi and Abel are amazingly compelling characters. My only problem is that Gray really likes to write love stories and about the power of love, which isn’t what I thought Defy the Stars was going to be.
The copy of Defy the Stars that I had did not have “love is the ultimate rebellion” on it, so I didn’t think was going to be a love story. But oh, it was. Mostly I thought it wouldn’t be because the synopsis didn’t imply it, but mostly it was because when Abel was described as “one of Earth’s robotic mech warriors” I pictured something like K-2SO from Rogue One. Instead Abel is dashingly blond, ripped, and disturbingly human inside and out (he’s even programmed with knowledge of sex positions). Having plonked this information at the start of my review so that other readers will be aware that whilst this not purely a love story, it is actually quite a minor part and is written in a charming manner, it is an element of the book when I thought it wouldn’t be at all.

She’s learned how to fight. Next she has to learn how to die.

Noemi Vidal is willing to die for Genesis, an Earth colony that has rejected technology beyond that which is “necessary” for survival. Genesis is at war with Earth, which sends mech soldiers to fight Genesis’ blood and flesh soldiers. Obviously, Genesis is losing the war when Noemi volunteers to take part in the Masada Run, a suicide mission meant to buy Genesis a number of years by tampering with the Gate that creates a passage from Earth to Genesis. Caught in a minor skirmish, Noemi boards the Daedalus, looking for medical aid for her injured friend Esther. Unfortunately for her, the Daedalus has been abandoned for thirty years, inhabited only by the most advanced mech ever created by Burton Mansfied: Model A, Abel.

Whilst Abel is unerringly loyal to Mansfield, his programming demands that he submits to the orders of the human with the highest ranking aboard the ship which is now, after thirty years of isolation, is Noemi Vidal. Together they embark on an adventure around the universe to save Genesis. The best aspect of this book is the development of Noemi, Abel, and how they relate to each other. You really have to like the pair of them because for a good 75% of this book they are the only characters. Noemi despises Abel for being a soldier of Earth, but also because he has no soul: he is a pure machine. But she also knows that this hate is ridiculous, for without a soul there can be no sin. Abel dislikes Noemi because she is keeping him from returning to Mansfield on Earth. The book alternates between their perspectives, but always remains in third person.

Noemi knows what her duty to God is right now: Fight like hell.

Noemi is interesting. She doesn’t like herself much, sees herself as selfish, a coward, an inconvenience. Yet we never see any evidence of this. She is selfless in agreeing to a suicide mission, brave in facing her fears. There is literally no reason for Noemi to see herself in this way and it’s a bit jarring to read, as it clearly and obviously contradicts her actions. She is clever, innovative, loyal, and a good soldier. Her primary duty is always to Genesis and it is really enjoyable to watch her develop over the course of the book. What was particularly interesting was her perspective on religious faith, which isn’t something that crops up in non-Christian-eque books. She talks about sin, about faith, and souls, and I really think it does add well to the plot and her character. The culture on Genesis has reverted back to strong focus on faiths of all types; Noemi belongs to the Second Catholic Church and whilst she never loses this faith, she does question and doubt it, providing a nice parallel to Abel.

Like every good science fiction novel a lot of Abel’s character revolves around whether or not he has a soul, how close is Abel to human? This is a really interesting philosophical inquiry: does he have free will? Can he choose to disobey his programming? The philosophy university student in me didn’t think that Gray pushed these questions enough, but the reader in me thought that for a YA novel it had just the right amount of questioning. Beyond this, Abel does have a personality of his own. He loves Casablanca, for example. He also loves his creator, Mansfield, and their relationship is written in a lovely, tender, and heartbreaking way. Beyond Noemi and Abel there aren’t many characters that get much page time, but my favourite is Virginia Redbird: a code breaker and nerd who has 0 self-preservation skills. In terms of diversity, Virginia is bisexual and Noemi is of Latin American and Polynesian ancestry and is relatively bulked up, which is great to see in a female character.

But even if you don’t need something, can’t you want it? Surely it can’t be wrong to want to see more of creation. To behold the universe from every possible angle – to be the way in which the universe is able to behold itself.

Initially, I was slightly concerned about the plot. Amazon puts Defy the Stars at about 450 pages, but the plot is very simple: destroy the Gate so that Genesis can be safe from Earth. It’s really simple and I did not see how it could stretch to cover such a long book. I still think it was a bit too long, but it did allow for the reader to experience all of the world Gray has crafted. There’s the Loop: a ring of five planets connected by Gates; Genesis, which has preserved its natural resources and nature, connects to Kismet, holiday planet for the wealthy, which connects to Cray, a hub of scientific investigation that lives below the surface of the planet, to Stronghold, an over-populated mining colony, to Earth, ruined after hundreds of years of extortion, back to Genesis. It’s a simple setting but it works so well. It’s also got a bunch of other good sci-fi tropes like disease (called Cobweb), more robots, and a sense of rebellion in the air.

Abel thinks of Noemi as belonging to both Genesis and to the stars, as a person who will always have a place on more than one world

Gray’s writing style is also wonderful. The voices of Noemi and Abel are wonderfully distinct; I’m always sure whose chapter I’m reading and they both have great inner dialogue. As I mentioned before, it’s got lots of scientific, religious and philosophical undertones which are often present but never dominate the plot. I went highlighter crazy on this book!

Defy the Stars was a beautiful read, which I thoroughly recommend if you liked A Thousand Pieces of You (for the writing style and the emphasis on love) or sci-fi stories set in space like A Long Way To A Small Angry Planet or perhaps Asimov’s works.

My thanks to Netgalley, the publisher, and the author for an ARC of Defy the Stars.