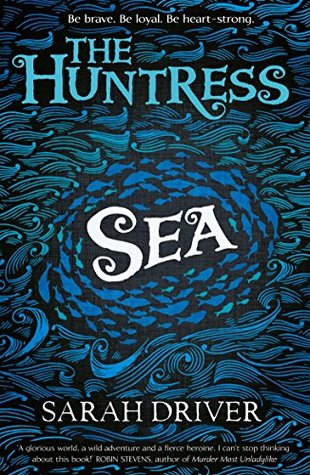 What am I, without my ship? I hunch over the spiny bump and grip Sparrow’s hand. Shooting stars sizzle through the night sky. The sky-gods must be warring with fire and iron spears.

In the sky, the fire spirits dance and ripple. Grandma says they showed our Tribe that I’d be a captain, before I was even born.
Ever since Ma died, Mouse has looked after her little brother, Sparrow, dreaming of her destiny as captain of the Huntress. But now Da’s missing, Sparrow is in danger, and a deathly cold is creeping across Trianukka . . .

* * *
3 / 5
Reading Sea felt a little bit like reading The Chronicles of Ancient Darkness, with respect to the tribes and the amount of research put into the context and little details, books which I loved (and still do) as a child. Though Sea didn’t quite have the scope and originality of those books, it was still a solid, fun read. I was also getting a bit of a How To Train Your Dragon vibe (the books, not the films) which is a very favourable comparison in my book!

“We rove!” “We rove to trade, to meet, for the restlessness in our bones; we rove at one with the sea!”

In the world of The Huntress there are land, sea, and sky tribes. Mouse, our young protagonist belongs to a sea tribe that lives aboard the trading ship The Huntress, under the captaincy of her grandmother, Captain Wren. Mouse also has a younger brother, Sparrow, whom she loves deeply but also finds a touch irritating. Life aboard The Huntress is going as normal until Wren lets aboard an old tribesmember, Stag, who has less than savoury motives towards the ship and the crew.

I particularly liked that Mouse’s closest relative was her grandmother, a badass older woman with one eye who captained her ship with an iron resolve. Not only was she super cool, it was lovely to see a slightly different kind of familial relationship captured on paper. Mouse herself is tough, tenacious, and bit stupid, which can be forgiven in a thirteen year old girl!

“Stray whale-song from last night is snagged in the sails, noisy and glowing. Thaw-Wielder swoops at it, chortling when it gets caught in her feathers”

There’s lots of nicely utilised fantasy book staples – the missing father, the animal companion, Mouse being able to talk to animals with “beast-chatter”. All of these, whilst not particularly original, are fun little additions. There’s also my favourite character Crow, who has a couple of little magical secrets up his sleeves, who comes in about two thirds the way through. I’m also curious as to whether all the characters are named after animals, as everyone bar some guy called Hammer is, and whether this leads to lots of people having the same name! Unfortunately, this is never addressed.

“There are ancient songs in the air, waiting to be hooked, like fish,” Da tells him. “Shall we sing?”

The universe was intriguing. As I mentioned previously, a solid half of the book takes place on a boat. It felt like Driver had clearly done her research here (at least to me, the non-nautical expert), which helped massively in immersing me in Sparrow’s world. The other key themes of this book are whales – there’s lots of gorgeous whale-themed illustrations – and music. It’s not very well described, but it seems like songs can drift through the air in physical forms, and you can catch them. The idea is quite cool and magical but rather sparse on the details. The same is true of the magic system – Mouse can do some kind of dream-dance and there’s kinds of blood magic. Sparrow’s magical abilities also aren’t particularly well articulated – I’m not quite sure what he can do and why other people would want this ability.

Unfortunately, it felt like Driver was attempting to stretch one book’s worth of plot into a trilogy, which ultimately left me feeling a touch dissatisfied. The main arc of the plot revolves around saving her brother, Sparrow, and the collection of three orbs. I presume that in each book Mouse will find an orb and this will be written into a trilogy (although I could be wrong). Personally, I prefer my children’s books to be self-contained, multiple standalones set within a single universe, but this is simply a preference. The result of this is a lot of loose ends trailing around – what happens to the crew of The Huntress, for example?

Overall, The Huntress is a good book for children (the target audience!). It’s got some pretty cool elements to the universe, the characters are likeable, and the plot is decent if nothing particularly original.

My thanks to Netgalley, the publisher, and the author for a copy of this book