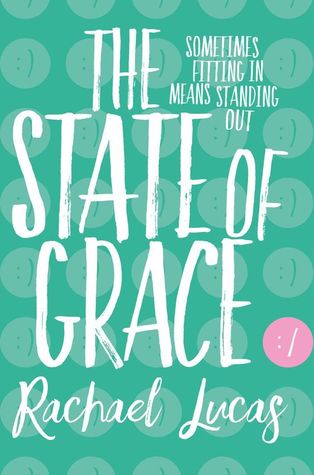 And the funny thing I’ve figured out is that sometimes, when it seems like everything is falling apart, it’s not the end – it’s the beginning.

Grace has Asperger’s and her own way of looking at the world. She’s got a horse and a best friend who understand her, and that’s pretty much all she needs. But when Grace kisses Gabe and things start to change at home, the world doesn’t make much sense to her any more.
Suddenly everything threatens to fall apart, and it’s up to Grace to fix it on her own.

The State of Grace is a book about being young, growing up and having Asperger’s by, I’m informed, an author on the autistic spectrum. I think these kinds of books are particularly important, so I was impressed not only by the sensitive depiction of Grace but by the fast-paced plot, solid writing, and the way Lucas managed to capture the awkwardness of being a young teenage girl.

I need to be quiet, somewhere, and just let myself settle, like a snow globe. But it’s hard to make people understand that.

Grace has Asperger’s – loud noises and sensations overwhelm her, sometimes she can’t recognise people that she knows, or misses social clues which cause other people to get unfairly frustrated with her – but she also loves horses, in particular her horse Mabel, her cat Withnail, her sister Leah, and her best friend Anna. She’s also about to kiss Gabe Kowalski at the biggest party of the year. Another reviewer said that they so rarely get to read about people with Asperger’s getting love stories – and this love story really is much like any other. Gabe is a sweet fifteen year old boy with ADHD, and is the most popular boy in the year.
Alongside the romance, the book deals with family issues, Grace’s sister Leah is thirteen and growing up fast, wanting to try new friends and alcohol whilst their mum seems a bit absent. She’s reconnected with her university friend “Evil Eve” who is single and childless and wants to pick up her friendship with Grace’s mum where it left off, fun and carefree and complete with copious amounts of wine. Then there’s their dad, always jetting off around the world on wildlife photoshoots and filming documentaries. All the while Grace is trying to fit in, figure out dating, and worrying about what to wear to her mate’s sixteenth birthday party.

I’ve been on a date, nothing disastrous has happened and today I’m winning at being a human

The State of Grace pretty decently captures growing up a teenage girl and it has a lot of love for horses. Grace spends a lot of time riding Mabel, grooming her, and mucking out her stable. If you aren’t that big on horses – beware, Mabel features a lot. This book is also wonderfully diverse – aside from Grace, there’s Gabe who is Polish with ADHD and the older lesbian couple who works at the stables.
However, I think The State of Grace tries to tackle a bit too much. Whilst it does justice to the mum and romance storylines, there’s also the absentee father and Leah’s plots. Their dad only appears in the book once, but he’s mentioned quite a bit and it feels like he’s wrapped up a bit too neatly. Leah is having friendship troubles and there’s quite a serious incident which is sort of swept under the rug. I think Lucas tries to cram too much into what is quite a short novel. It’s also got the very typical “mean girl” antagonist.
But, The State of Grace is a really good and quick read. It goes into the nitty gritty about how living with Asperger’s can be difficult and how people can treat you like you are lesser, but simultaneously has a really sweet romance.

My thanks to Netgalley, the publisher, and the author for providing me with an ARC.