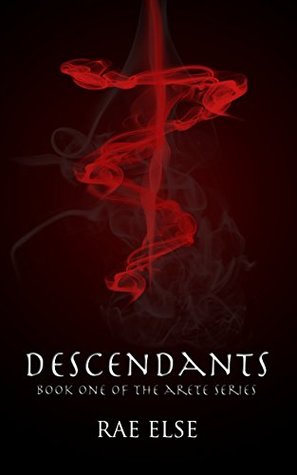 I used to wonder if we were carrying Eve’s sin: to always bear the temptation of the serpent

El, a seventeen-year-old has inherited an ancient and deadly power. She loses control of it, causing a horrific accident, and becomes the prey of a secret organisation, known as the Order. Forced from her family and home, she hides in plain sight amidst the crowds of London, and is thrust into a world she never knew existed; one full of arete: beings with extraordinary powers like hers.
Arete are beings that can trace their lineage and powers from ancient Greece. They do not claim their inheritance comes from the gods, rather legend says they are descended from cursed beings, such as Medusa.
At the heart of their world is the kerykeion, the symbol that protects them from the humans and the humans from them. El is trapped between two factions, one that has built an empire around the kerykeion and another that is determined to bring it down. As she is drawn deeper into the conflict, the only way to find the truth is to take matters into her own hands, and the line between friend and foe becomes dangerously blurred.

2 / 5
Descendants sounded and started off like it was going to be in the vein of Percy Jackson, before diverging in a wildly different direction at breakneck speed. Everything happens so fast in this short novel (210 pages) that I felt like I was getting whiplash. There’s betrayals, characters appearing and disappearing and dying, plot twists occurring so quickly that I found it difficult to care all that much about what was happening. I think Descendants would have done better as a longer book.

El is a descendant of Medusa and/or Perseus. This is the idea that piqued my interest but unfortunately it doesn’t get much exploration beyond “this is your ancestor so you get special magical powers”. El is a drakon – she has fire elemental powers and can sometimes manipulate people into doing as she wishes. When a magical incident occurs El is whisked away from her guardian, her blind grandmother, into the heart of London and the arete community. From there she is bound up in all kinds of conspiracies.
First off, some positives. Fight scenes take up roughly the last third of the book and they are reasonably cool and well written. There’s elemental powers and things exploding everywhere. I also quite liked El’s grandmother, Helena, who was a badass older woman who had at one point been a badass younger woman. I love it when books include older female figures and Helena was a fine character. I also liked the mythology that Else drew into her book – the role of the kerykeion is pretty big, there’s lots of ancestors of different types of Ancient Greek monsters, and there’s descriptions of famous paintings woven in.

for she who carries the weight of the world on her shoulders, may she know both her strength and the joys she holds

Our protagonist, El, I was rather ambivalent about. At the beginning she got my sympathy, being thrust into a world that she knew nothing about. She made understandable choices given her circumstances. But she was also just so bland. El masters fire magic after literally learning that she can do it after a week, El has a crush on a fit equally bland boy who we (and she) knows virtually nothing about, and El decides to commit her life to a cause she betrayed about 5 days ago. She rather trope-y and there isn’t much to set her apart. Likewise, the rest of the cast is so-so.
The writing is a bit rough, but that wasn’t too much of an issue once I got into the book. What was an issue was the actual narrative. It simply went too quickly for me. It alternated between telling you nothing and info-dumping via El reading some books someone gave her. There were too many specialist terms being thrown around. Then there’s the quick way that plot elements are being tossed around without being tied up or given the correct emotional response – El’s friend, El’s mother and grandmother, the Triad.
The worldbuilding had a fair chunk in common with Percy Jackson and other YA fantasy novels to truly stand out. There’s magic that clouds the arete from the human gaze, El, like Percy, is raised not knowing anything about her ancient heritage and the people like her, for example. The enemy, the Order, is fairly nondescript – they’re a group of arete who occasionally do bad things. The novel clearly had some great original ideas but these really weren’t developed enough.
Descendants would have benefited a lot from being longer with more time to explain what was going on and develop the characters properly. There were some solid scenes and fun ideas, but Descendants was ultimately too confusing and fast-paced for me to properly enjoy.
My thanks to Netgalley, the publisher, and the author for an ARC.