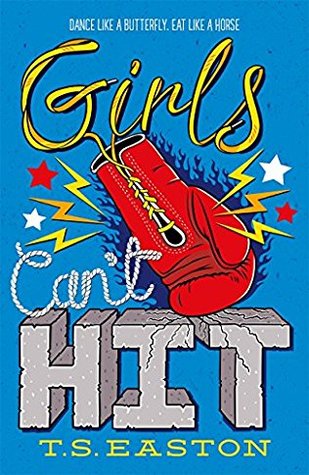 I’d trained hard too. Bonita may have thought I was some useless piece of dental floss, who’d never worked hard for anything, but she was wrong. I’d run, I’d cycled, I’d lifted weights over and over until I hated the sight of the damn things.

Fleur Waters never takes anything seriously – until she turns up at her local boxing club one day, just to prove a point. She’s the only girl there, and the warm-up alone is exhausting . . . but the workout gives her an escape from home and school, and when she lands her first uppercut on a punching bag she feels a rare glow of satisfaction. So she goes back the next week, determined to improve.
Fleur’s overprotective mum can’t abide the idea of her entering a boxing ring, why won’t she join her pilates class instead? Her friends don’t get it either and even her boyfriend, ‘Prince’ George, seems concerned by her growing muscles and appetite – but it’s Fleur’s body, Fleur’s life, so she digs her heels in and carries on with her training. When she finally makes it into the ring, her friends and family show their support and Fleur realises that sometimes in life it’s better to drop your guard and take a wild swing!

* * * *
4 / 5
Girls Can’t Hit is a lovely, emotional, and heart warming story about boxing, friendship, family relationships, and knowing when to fight. Fleur Waters takes up boxing to prove a point and ends up loving it, despite everyone trying to stand in her way. It’s about Fleur changing as a person, growing into someone she never thought that she could be and finding she loves it. Only problem is her mother hates her hobby, her boyfriend thinks she’s getting too masculine, and her friends think she’s becoming too distant. Awkward.
I must admit that I wasn’t overly fond of the title – I get that’s it is supposed to be satirical and ironic, but I rather fear that girls will be put off reading it. I was also caught off-guard by the opening scenes; the language and writing style seemed like it was aimed at a younger audience than I was expecting (possibly my fault for not examining the back cover closely enough), but that was no big deal. Despite the younger target audience, I found Girls Can’t Hit an absolute page-turner, finishing it in under a day! The real draw here is Fleur and her narrative arc.

“I’m starving,” I said. “I’ve been exercising a lot lately.”

“Maybe you need to cut down a little on the exercise,” George said. I blinked at him. Has anyone ever said that to anyone in the world before?

Fleur as a narrator is wonderful. She’s funny, her struggles are genuine, and she’s likeable. Her relationship with her parents is particularly well written; as she grows fitter she gets closer to her father, they go cycling together and to the bike shop, she takes up running and he is proud of her progress. On the other hand, her mother is infuriatingly protective – at first it seems like this is out of her feeling like boxing isn’t a suitable sport for women, but then we get a little tear-jerker of a scene where we find out why she doesn’t want Fleur to box. But I also really empathised with Fleur: she has a boyfriend George, prim and proper who thinks she’s getting too muscular and eating too much, and a mother who won’t support her new hobby. It’s infuriating to read.

And part of me felt as though it was done now. I’d come along, I’d gone with it, and I’d even done okay. I didn’t need to come back again. I could leave with my head held high.

Then there’s her two best friends Blossom, hardcore radical feminist who is portrayed in an amusing but serious way (“Of course they’ll notice you’re girls.” “We are going to be swishing swords,” Blossom said. “Not twirling tampons.”), and Pip, a slightly scatty, weedy boy that can’t drive properly to save his life. They’ve got this really lovely trio friendship dynamic going on. Blossom is the one who introduces Fleur to the boxing club as part of making a point about how women can do real boxing, not just boxercise. It’s here that the story really starts to take off and I started rooting for Fleur. There’s nothing particularly surprising or innovative about the plot, but it’s well-written, emotional and engaging.

“It’s going too far, Fleur,” she replied. “I see you eating whey protein and kissing your biceps. I see you out-cycling your father and clanking weights at all hours. I see you wearing boxing boots to a mess ball.”

Being a female martial artist myself (I did taekwondo as a teenager and took up Jiu Jitsu at university where, very fortunately, our club has an excellent male:female ratio) I empathised a lot with Fleur and her entering a male-dominated sport. I think Easton perfectly captured the sort of experience that I have occasionally had: men don’t tend to be rude to you or patronising (with a few exceptions), but instead you get enveloped in this kind of male “aura” where they think it is perfectly acceptable to make crass and sexist jokes around you. I, like Fleur, can take a joke, but it sometimes reaches that point where you are uncomfortable but don’t want to rock the boat. There’s also usually a fair amount of drinking culture, which Easton included and tackled well.
On the boxing aspect itself, I don’t know anything in particular about boxing so I can’t comment on the accuracy of the depiction. I do think Fleur puts on a lot of weight and muscle mass in an unrealistic amount of time and missed out on a couple of particular quirks that, in my experience and those I know at least, female martial artists tend to get. For example, a lot of forearm, hand, and leg bruises that tend to lead to concerned questions and offers of support from people (I’m very glad they do this, as now I know that if I am ever in a violent situation, people will and do offer their help). Fleur trains once or twice a week for an hour at a time – that’s not a lot at all particularly regarding her spike in fitness and appetite, but obviously that’s a very minor quibble.

“Girls don’t need to be sporty any more than they need to be princesses. You don’t get to decide what I should be.”

Bonita, the closest person Fleur had to an antagonist, needed more fleshing out at the start. She’s a seriously competitive hockey player that seems to dislike Fleur because she can’t be bothered in PE lessons. But then she and a couple of her friends join the boxing club – why? Seemingly out of spite. I didn’t really get the motivation here. But particularly towards the end of the book, Bonita gets a lot more backstory and depth, her character really coming into its own. There’s a couple of moments where Fleur makes assumptions about Bonita which get turned on her head. It’s here where I really started to empathise with Bonita too – she’s not typically attractive, she’s competitive, and seems to love to fight. She becomes a nice contrast to Fleur, making her realise the advantages she’s got in life.
A really lovely recurring theme is the Battle of Hastings 1066, Normans versus Saxons. Fleur, Blossom, and Pip work at a castle dressing up, giving tours, and reenacting in mock battles. They all always play Saxons and Easton uses this as a bizarre and charming metaphor throughout the book. I liked the way he wove these little references to British history with Fleur’s story of developing as a boxer. He also makes reenacting battles sound really fun!
Overall, Girls Can’t Hit is a great little novel that really inspired me to hike up my own training and healthy eating regimen! Even if you don’t much like boxing, you might surprise yourself with this one.