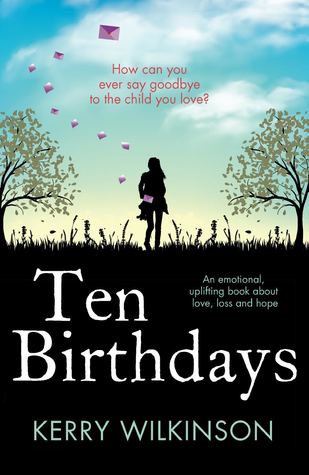 My dearest Poppy, I’ve wondered for a long time whether I should do this. That this might be a selfish act because I want to somehow live on in your life. I honestly don’t know any longer.

It’s Poppy Kinsey’s birthday. She should be blowing out candles and opening presents – but hers falls on the type of heart-wrenching, agonising anniversary she would far rather forget.

The worst day of them all. The day her mother died.
But this year is special because the person she misses most in the world has left her a set of letters, one for each of her next ten birthdays. As Poppy opens them year by year, she discovers that no matter how tough life gets, her mum will always be by her side, guiding her along the way.

Ten Birthdays is a poignant story about grief and growing older. Poppy Kinsey’s mother died on her fifteenth birthday, leaving Poppy and her dad behind to live in a little village just outside Bristol. Poppy’s mother left behind ten letters, one for each of Poppy’s birthdays. The book follows Poppy through each of these birthdays as she and the people around her grow older and change from year to year.

We were all sixteen once. You should never underestimate the power of simply having fun – especially at your age, before the boring adult stuff catches you up

The idea behind Ten Birthdays is pretty good. Each year Poppy opens a letter on her birthday, full of messages of love from her mother, a story about how her name was chosen, or how her parents met. They also have some reflections of life and thoughtful contemplations. Wrapped around these letters is Poppy’s relationship with her father, her best friend Mark, and his girlfriend Freya. Watching the three diverging paths these three young people take is really interesting – they all end up reasonably happy and successful in their own ways, which is absolutely an important message.
Poppy drops out of school at seventeen and whilst Mark and Freya get ready to head off to university she’s working as a barista. Mark goes down the conventional route – good degree, gets married to a nice girl and gets a good job. Freya and Poppy have more winding routes to happiness, but all three characters are a joy to follow. They felt like real people even if, and particularly because, they were at times quite dislikeable.

If you love her you should find a way to fix it. That might mean going home. There are always other jobs. There aren’t always other people who love you.

The format of Ten Birthdays does come with a few downsides. Because we only ever see one day out of three hundred and sixty five of each year, it’s a bit hard to connect with Poppy as a character. The format does make it really nice to watch Poppy as she gets older and you can see the natural changes her personality goes through, so it’s great as a sort of character study. But it does make it hard to actually relate to her. The format does also get a bit repetitive by the end – we’re always cycling through the “hey, Poppy, happy birthday” and “here’s a gift” shindig.
Ten Birthdays is a short read with strong characters. It’s a coming-of-age story that’s about family, loss, love, and friendship.
My thanks to Netgalley, the publisher, and the author for an ARC of this book.