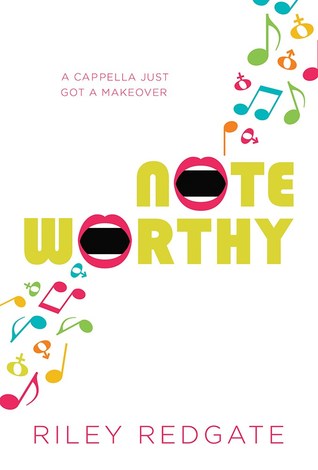 As I stood there in that derelict husk of a theatre, I felt like I’d got lost in between my lives, and the road ahead looked long and strange and poorly lit.

It’s the start of Jordan Sun’s junior year at the Kensington-Blaine Boarding School for the Performing Arts. Unfortunately, she’s an Alto 2, which—in the musical theatre world—is sort of like being a vulture in the wild: She has a spot in the ecosystem, but nobody’s falling over themselves to express their appreciation. So it’s no surprise when she gets shut out of the fall musical for the third year straight.
Then the school gets a mass email: A spot has opened up in the Sharpshooters, Kensington’s elite a cappella octet. Worshiped … revered … all male. Desperate to prove herself, Jordan auditions in her most convincing drag, and it turns out that Jordan Sun, Tenor 1, is exactly what the Sharps are looking for.

I know nothing about a cappella beyond watching Pitch Perfect and literally nothing about performing arts schools. Despite this, Noteworthy was an absolute treat. The main character, Jordan Sun, disparaged by not making the musical for the third year running, disguises herself as a guy and auditions for the Sharpshooters, an all-male a cappella octet. Soon her life splits in two: one half concerned with passing her classes and making sure no one connects Jordan Sun and Julian Zhang, and the other half diving into the world of a cappella and the Sharps boys. Noteworthy is funny, mature, and deals sensitively with topics like the differences in male and female socialisation, being gay and bisexual, and chasing your dreams. The vibe in the Sharpshooters is a little like The Raven Boys, so if you liked that dynamic, try Noteworthy!

Jordan is a Chinese-American (like the author, I believe) student, voice too deep to get any big singing roles, but with cut hair and her height, well, she can pass herself off a guy. Her parents are fighting, her mother just got laid off, her father is trying to pay off hospital bills, and money is always tight. But in the Sharps, Jordan finds a home despite her attempts to keep the boys at arms distance, they creep their way into her life. There’s Isaac, leader of the group, charming and wild and always down to do something a bit risky. Then there’s Trav (my personal favourite), musical arranger and the stern, guiding hand of the group. Nihal is quieter, Sikh, and trying to manage his own personal issues. There’s also Jon Cox, Marcus, Erik, and Theodore.

This disguise looked convincing enough to turn me invisible I was just some guy. Anonymous. Nobody. The world saw exactly what it wanted to see. Finally, it wanted to see me.

This book is also really funny (“she couldn’t be pursuing me – I’d told her I was dating Bertha. I would never cheat on Bertha. We had a beautiful relationship”) and relatable. Trying to hide crippling cramps and using toilet paper as a pad? Girl, we’ve all been there. There’s a ridiculous dude rivalry between the all-male a cappella groups, involving secret bases. But it also tackles a lot of real issues: when she’s a guy, Jordan realises the way that guys are treated differently and the way men can talk when they think women aren’t around, not cruelly but with the kind of off-hand comments that suggest women are lesser. There’s also a really frank examination of what it can feel like to be poor.
I did feel a bit tricked in that I was expecting a book set in university. Clearly my fault for not reading the synopsis properly! I mistakenly thought “college” meant university and not boarding school… This meant that the characters were younger, around sixteen, and their issues revolved around cliques, weed, and parents. But Noteworthy was a delightfully mature read, so once I readjusted my view of Jordan as a teenager, I was enthralled.
Redgate sensitively walked the line between being trans and what Jordan was doing as a clearly non-trans individual. What I do wish, however, is that Redgate had put in a couple of lines about how binding is terrible for your health. She writes that there are “health risk of strapping your chest back with ACE bandages”, but the truth is that there is no safe way to bind: they all do damage – compressions shirts (like Jordan uses), too-small sports bras, bandages – none of these are good for you. The only safe way is a well fitting sports bra, which won’t really flatly compress your chest because that isn’t the point of them. This is something I wish I had known as a young teenager and I am slightly concerned that Redgate is suggesting that there are safe ways to bind when there aren’t. On the whole I thought her tackling of the issue was great, I just would have appreciated a throwaway line about this.

“Isaac, Jon Cox, and Theodore are delightful people who tend to get so far up their own asses they lose sight of daylight”

My other criticism is that about halfway through or a little more, the rest of the Sharpshooters kind of drop out of the plot. There’s not much mention of Trav, Nihal, Mama, etc. for quite a while until they pop back up at the end in time for the competition. This is particularly a shame since for the first half of the book the relationships between Jordan and the Sharps were being really well developed and then were just palmed off to the side, behind Jordan’s money and parent troubles. In this vein, I couldn’t really keep Jon Cox, Erik or Marcus distinct in my head; Trav, Isaac and Nihal were definitely the standouts of the Sharps. Apparently some of them, other than Isaac, were also not-white, which I hadn’t noticed because the physical descriptions were really sparse.

It took being your own to want somebody else. Now I could, and it was drowning me, and Victoria was mint and Isaac was a smile and every person I knew was such a work of art

What I did like a lot was Jordan’s exploration of her bisexuality and her subsequent romance. I think her difficulty in sorting out whether she just liked women or wanted to be with women was very poignant and realistic, I related a lot. Her romance also developed quite naturally out of a friendship. This was amazingly done, to the point where I didn’t know for the first half of the book which one she would end up with (I knew there was a romance and was keeping an eye out for it), because her friendships with Trav, Isaac, and Nihal are all fully developed. Massive kudos to the author for this!
Reading this book does require quite a lot of suspension of belief: even if Jordan could successfully pass herself off as a guy in front of strangers, there’s no way she wouldn’t be caught. What about admin? You can’t create a fake persona and get that through any sort of school system, and the amount of forms and paperwork student groups require can be insane. So prepare to withhold your “there’s no way that would actually work” comments and delve into the immensely fun and well-written novel that is Noteworthy.
My thanks to Netgalley, the publisher, and the author for an ARC of this book.