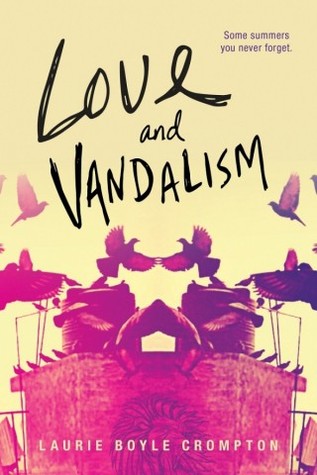 Rory has a secret: she’s the vandal who paints graffiti lions all over her small town. If her policeman dad knew, he’d probably disown her. So when Hayes, a former screw-up on the path to recovery, catches her in the act, Rory’s sure she’s busted. Instead, he makes her a deal. If Rory shows him around town, he won’t turn her in. It might be coercion, but at least the boy is hot.

As they spend more time together, Rory worries she made the wrong choice. Hayes has a way of making her want things she shouldn’t want and feel emotions she’s tried to bury. Rory’s going to have to distance herself from Hayes or confront a secret she can’t bring herself to face…

This was an odd book. It had one spectacular twist and some exploration of art, mental health, alcoholism, family relationships and the like, but there was also a whole load of eye rolling on my part and cringe-worthy scenes. Love and Vandalism is, in essence, a romance story.

I sigh. I’m way to stubborn to be a true artist because I don’t give a shit if he’s dripping and deformed and his colours are all wrong, wrong, wrong; this lion is going to freaking roar at the break of dawn

Rory paints graffiti in secret, hiding her art from her (vaguely) abusive cop father. She spray paints roaring lions across the city as some sort of artistic therapy and teenage danger high. When she is caught spray painting by a stranger, Rory strikes a deal: Hayes won’t turn her in and she’ll show him all the best spots around town: the best restaurants, the most beautiful natural spots, the secrets the locals keep. He won’t leave her along due to some perceived spiritual connection on his part.
As a character, I found Rory a bit bland, to be honest. I read this book under a week ago and I’m having a bit of difficulty recalling much about her, other than that she loves art. She’s gritty and brash and angry and impulsive. I’ve noticed that other reviewers don’t much like the fact that she does weed and has sex – I can’t say that this bothered me; I found Rory’s character to be understandable, if a touch annoying. I found that I did prefer her to the love interest, Hayes. He’s a weird variation on the nice guy trope with a penchant for talking about fate and sounding pseudo-spiritual.
I wasn’t really a fan of their romance; I wasn’t convinced by them as a couple. Frankly, I think it would have been best for the pair of them to leave each other alone and go to therapy. Hayes only ever manages to upset Rory, whilst she’s constantly risking his parole in order to satisfy her dream to paint a lion on the town’s water tower. The best romance here is in the subplot between Rory’s manager at the art store and her coworker. It’s cute and nerdy and made me smile.

“Our stars have aligned,” Ken says. “Your Wars and my Trek.”

The art was the standout feature of this book for me. How it weaved it’s way through Rory’s life via her mother, how it impacted her childhood and the angry teenager she became. How it is now a sort of therapy for her. I was disappointed by the lack of actual graffiti-ing in Love and Vandalism. I wanted to know more about it! How do you create all the effects? How do you do it with a stencil by yourself? Rory’s lions are pretty awesome and the ending scenes of this book involving graffiti are great and really heartwarming.
This book is emotional and sometimes hard hitting in a good way. Unfortunately, I didn’t much care for either of the two main characters, which dampened the joy I got from the artistic scenes.
My thanks to Netgalley, the publisher, and the author for an ARC of this book.