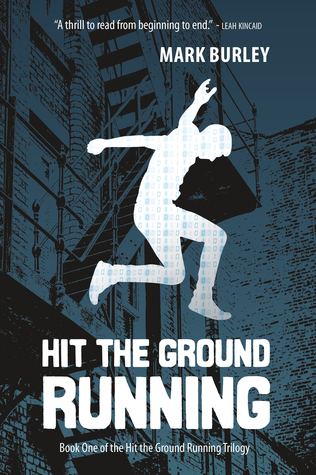 Eric might not be getting along with his family—or anyone else, for that matter—but he’s pretty sure a boarding school in another country isn’t the answer. Skilled in parkour, running helps him deal. So be it, he decides. Do the time and get out. Flow like water. But when he gets a cryptic message from his brother telling him their parents have been abducted, and then his brother disappears, he realises they weren’t punishing him, they were hiding him.

To find them, Eric has to discover the secrets of his parents’ research, but the conspiracy he uncovers threatens more than just his family. With help from unlikely new friends, a hack-first-ask-questions-later approach to computers, and a dangerous plan, he soon learns that some secrets don’t want to be found, and others have a way of revealing themselves at all the wrong times.

* * *
3 / 5
Eric gets a mysterious video message from his brother that ends in his apparent kidnapping. Unsure if this is a joke or not, Eric recruits fellow schoolmates Tess, Seth, and Lakey, to help him investigate. We get pulled into the web of mysteries that surrounds Eric, his brother, their parents and their team’s latest archaeological dig in Libya. Hit the Ground Running is well written and the characters are great, but the action is predictable and the mystery bizarre.
The highlight here is the cast. Eric is a pretty solid guy. Sure, he’s a bit annoyed that his parents shipped him off to Canadian boarding school with about 3 days notice, but he cares for them. He’s also got an interesting background: up until about fifteen, he tailed his parents on their archaeological digs around the world, learning to ride camels, speak different languages, and free run. He’s certainly a likeable enough main character. Shaken up by the video message he receives, Eric turns to classmate Tess, who’s up for a wild adventure. Even if it involves motorbikes and guns.
Through Tess we are introduced to my favourite characters: twin computer geniuses and sports enthusiasts Lakey and Seth. They’ve been forging ID’s since they were 13 and driving around the country in their own RV to surf the craziest waves. Sure, they’re a bit unbelievable as characters, but they aren’t over the top and they’re a fun addition to the cast.

They are hunter and prey, pursuing and evading each other through the centuries, and the key to their longevity is something real to be discovered

Then there’s the mystery. As far as the plot goes, it’s reasonably standard: someone powerful wants to find Eric’s parents and there’s a mysterious artefact floating around. There’s a lot of basic tropes, including the “oh so this guy has all the answers that we need oh dear he just died”, and airport chases, hired thugs, and people not quite being what they seem. The writing is good enough to carry the mundanity of the action, however,  as I found Burley’s rather simple style to be a perfect fit for the book. Whilst, on the whole, I did quite enjoy Hit the Ground Running, I’m going to highlight a number of complaints that I had.
Complaint number one: This is a pretty minor gripe, but there isn’t a lot of parkour in this! The title, cover, and synopsis all make reference to Eric being a running and parkour enthusiast, but there’s not a lot of page time devoted to this, which is such a shame. The few scenes where Eric utilises his skills are pretty awesome and I’d have loved to read more about it, as it’s a sport I’m not particularly knowledgeable about.

I’m saying, the reason Azzara took over the site, the thing he seeks, is not a stone. These people were murdered because of a secret.

Complaint number two: It gets really quite weird. As I mentioned earlier, I was really thrilled to find out that Eric’s parents are archaeologists and that the mystery revolves around some sort of archaeological find that they made. Awesome, I thought, I love archaeology. But then the plot took this weird veering into supernatural stuff and it didn’t really work for me. The tone changed from artefacts and ancient cultures to zombies and immortality and curses, which I found a bit jarring.
Complaint number three: This is not a standalone book. I can’t actually find any evidence that there are more books planed, but it ended with a lot of loose ends flapping around and an epilogue that hinted at more. Hit The Ground Running is a thriller/mystery type books and I like those sorts of books to be standalones. This is purely a personal preference, but I probably wouldn’t have picked up this book if I had been aware that I would have to buy another book to get to the bottom of the mystery.
Overall, this book is a fun read but nothing particularly innovative or original. I recommend it to those that like the slightly bizarre, archaeology, and ancient mythology.