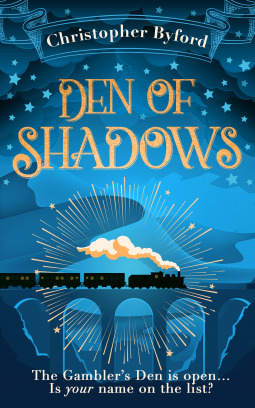 “I can’t stand the idea of not being in control, that something is pulling my strings to reach a destiny I can’t influence”

While fighting off poverty in the blistering desert heat a travelling casino offers one night of solace. One night to forget all your troubles. But once on board there is more to the show than meets the eye: enter Franco, the elaborate ringleader, Wyld the stowaway thief and Misu the fire breathing showgirl.
In a kingdom ruled by the law Franco ensures his den remains in line, ruling with an iron first. But when he’s faced with saving the fate of the train, and those on board, he may be forced to break his own rules. Life on the den isn’t just a job but a way of life. And now you’re about to find out why!

This book took me on such a roller-coaster ride of feelings. It has such a promising and solid start that I thought it would a 4 or 5 star read for sure. Then it sort of plodded along aimlessly, picked up a bit near the middle with some Western-vibe gunfights and political malarky, then shuffled to the end of the book. Den of Shadows could absolutely work for you if you like slow-paced, character study-esque novels, but unfortunately I found it rather underwhelming.

Redemption never walked through the drift-soiled alleyways with the pimps and beggars. Clemency never sat itself at a back-end tavern and ignored the drinking and whoring. She had learnt long ago that prayers were hollow words.

Den of Shadows is about a train. Franco owns The Gambler’s Den which roves on train tracks through the Sand Sea, a barren desert in a Rebel of the Sands sort of setting, providing lavish entertainment to the local people in the form of alcohol, gambling, and pretty women. The beginning features the train coming into a downtrodden weary town and it is genuinely a wonderful start, in a sort of The Night Circus fashion. Then the book focuses almost entirely on Franco, with a bit of unfinished background drama going on with Misu, the senior showgirl, and Wyld, a thief.
I’ll start off with some strong positives. I though the setting was pretty cool; the roving bandits, the desert towns, the dealings with the locals. The Gambler’s Den is also a thoroughly original idea (at least to me it was!). Further, the writing is simply lovely. It’s beautiful in an understated way, not at all purple-prose like Caraval, which the Goodread’s synopsis likens it to. The writing is so nice, in fact, that for the first third of the book it disguises the fact that absolutely nothing is happening. The train wanders around the desert, Wyld steals something, and Franco drinks himself into oblivion virtually every night.

Somewhere, in a place where the fatigue and inebriation collided, the past turned lucid

This book is really about Franco. Franco’s past, his present with The Gambler’s Den, his uncertain future on the train. It’s about his rags to riches tale. It’s about his relationships with his employees. It’s such a shame that I couldn’t stand him. I’m not sure if you were supposed to like him, to be fair, but I varied between being apathetic about him and then wanting to throw him off his own train. Far and away the best bits of the book focused on Jaques, a real stand up sort of guy who acted as Franco’s boyguard, and Wyld the mysterious stowaway thief.
The Gambler’s Den had a lot of promise (that cover is gorgeous!), but it failed to deliver on the plot and action elements.
My thanks to Netgalley, the publisher, and the author for an ARC of this book.