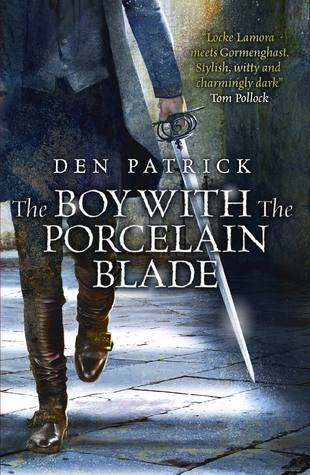 Vanity is always the first casualty of survival

Lucien de Fontein has grown up different. One of the mysterious and misshapen Orfano who appear around the Kingdom of Landfall, he is a talented fighter yet constantly lonely, tormented by his deformity, and well aware that he is a mere pawn in a political game. Ruled by an insane King and the venomous Majordomo, it is a world where corruption and decay are deeply rooted – but to a degree Lucien never dreams possible when he first discovers the plight of the ‘insane’ women kept in the haunting Sanatoria.
Told in a continuous narrative interspersed with flashbacks we see Lucien grow up under the care of his tutors. We watch him forced through rigorous Testings, and fall in love, set against his yearning to discover where he comes from, and how his fate is tied to that of every one of the deformed Orfano in the Kingdom, and of the eerie Sanatoria itself

I picked up The Boy With The Porcelain Blade from the library on a whim, mostly because the cover was nice and the title sounded a bit intriguing. For the first half or so I was rather underwhelmed, annoyed partly by constant switching back and forward in time and partly by the arrogant main character, Lucien. But slowly the book started to grow on me as the characters got fleshed out more and the action started building momentum.

“You’ll marry me Lucien. You’ll marry me if you want to live. And you’ll help me teach my mother a lesson. What you do at night is your own concern, but I will want an heir at some point, so try not to catch anything”

Lucien is an Orfano, part of a group of people that are born with a specific set of deformities: black nails, poisonous spines, fleshy growths. They are the King’s favoured, allowed to train with the best swordsmen in the city and under the tutelage of the best of the professore, but shunned by most of the people of Demesne due to their appearance. We meet Lucien as he undertakes his 18th birthday trial to become a man of the house of Fontein. He is arrogant, hot-headed, and brash, and I disliked him almost immediately. Eight pages later we zip backwards in time to nine years previously to meet a much more likeable eight year old Lucien. The book continues in this manner, flipping forwards and backwards every ten or so pages.
As you might have noticed, The Boy With The Porcelain Blade is set in some sort of quasi-Italian Renaissance setting. As far as I can tell, it is entirely fictional whilst adopting some of the language, clothes, and etiquette of that period. It’s a bit hard to tell because the setting is so vague and whilst it gets clearer as the book progress, the details still remain murky. There’s a land with one major city, Demesne, ruled over by a King who is about three hundred years old and is under the grasp of the Majordomo, a character of dubious allegiances and dastardly plots. There are four major houses: Fontein, Prospero, Erudito, and Contadino, each roughly based around different professions and character traits.

“Lady Anea Erudito wishes it to be known that the next person to use the word strega will, and I quote, “have their fucking head cut off”.”

The plot starts off slowly, interrupted by the all the backstory, and initially focuses around Lucien’s expulsion from Demesne. Yawn. It was boring and tedious and I was much more interested in the backstory because Lucien there is about ten times more likeable and interesting. The prose is also quite dense, with lots of details and confusing titles that make the beginning quite hard to get through. It was only after halfway through, when Younger Lucien was about sixteen and catching up to Older Lucien, that everything really picked up for me. It is such a shame that it took so long because I had almost given up by this point, when all of a sudden I was turning pages like there was no tomorrow.
What exactly improved? There were a few things. Firstly, the plot veers sharply into a mystery and is intriguing. I had a couple of notions about what was going on and turns out I was completely off course. A lot more politics and intrigue was developed alongside the lopping off of heads. Secondly, Lucien became a whole lot more likeable, mostly helped along by the backstory. I sympathised with his hot-headedness rather than being thoroughly irritated by it. Thirdly, the secondary characters become far more interesting, developed, and actually had stuff to do.

“Why can’t you be more like him? He’s got a nice suit. He’s got a drake on his shoulder. He’s got a sword cane. Really, Lucien, you’ve let the side down. This getting-thrown-into-the-oubliette business is beneath you”

I grew to love Anae and Dino, two of the other Orfano. Anae is slightly younger than Lucien and is mute; she writes notes and always wears a veil. Around her age is Dino, who keeps a drake as a pet, is adorable in a little suit, and carries a sword cane. He also swears explicitly and hilariously for a twelve year old. Then there’s Virmyre, one of Lucien’s teachers, equal parts stern professor and hilarious drunkard and father figure to Lucien. Opposing this close knit gang is the Majordomo. He’s a fabulous character because he’s so morally grey; I really wasn’t sure where his interests and allegiances lay until quite far on in the book.
The Boy With The Porcelain Blade requires a bit of work to get to the rewarding parts. I was interested, then bored, then more bored, and then all of a sudden I was laughing aloud and invested in the characters and the plot. I will be picking up the sequel and I hope it continues in the vein of the end of The Boy With The Porcelain Blade.