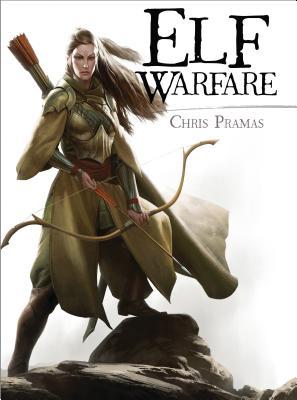 This book compiles all of the information known about these elegant warriors and how they practice war. From an initial examination of the fighting methods of the individual Elf warrior, it goes on to reveal how they do battle in small companies and vast armies. It covers all of their troop types–from their famed bowmen and swordmasters to their lightning-fast cavalry–making special note of regional variations and highly specialized fighters such as war mages.

* * *
3 / 5
This book is intended, I believe, as a sort of supplement to various tabletop and roleplaying games, to add a bit of flavour to their interpretation of Elves. As I don’t play these sorts of games, I was mostly interested in Elf Warfare because it promised lovely illustrations and I was not disappointed.
Elf Warfare is split into four sections: The Elves, a fictional historical account of elves discussing their origins, gods, and magic; Elf Troop Types, from basic unit types like archers to some creative kinds like moon elf infiltrators, as well as some information about elven allies like human tribes; Elf Strategies and Tactics, an interesting look at how elves might lay siege, fight on land or at sea; Elf Victories, an account of five great elvish battle victories illustrating how these tactics might be used.
This is a very short book, barely sixty pages but it has densely packed but easy to read text. There’s also small in-text sketches and diagrams as well as full-page artistic pieces, all of which are very nicely done. The writing is perhaps aimed at a slightly younger age than I was expecting – I had pictured a college/university aged audience – as it often says something like “the earth elves got into squabbles”. I also think that the pages could have been formatted better, for example by setting each topic out on a new page, as there are occasionally massive, blocky chunks of text. I would also have appreciated diagrams in the strategy section.

I do envision that this book would be great for roleplaying purposes. It divides elves into six different groups and explain the qualities and attributes of each group. I was also pleased to see that the book deviated from the Tolkien-type elf, which has become the most common depiction of the fantasy elf and in this book is referred to as the “wood” or “green” elf, by creating types like the “Gold elves” which have qualities one might classically attribute to dwarves. I particularly like the idea of nomadic sea elves!

I would recommend this little book to a roleplaying group looking for elvish inspiration.