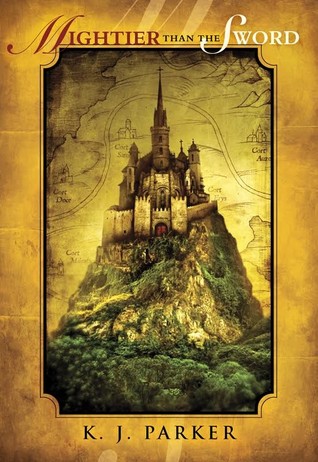 “Will you shut the fuck up about politics,” I said.

An Imperial legate is called into see his aunt, who just happens to be the empress running the civilized world while her husband’s in his sick bed. After some chastisement, she dispatches her nephew to take care of the dreaded Land and Sea Raiders, pirates who’ve been attacking the realm’s monasteries.
So begins a possibly doomed tour of banished relatives and uppity royals put in charge of monasteries like Cort Doce and Cort Maleston, to name a few. While attempting to discover the truth of what the pirates might be after, the legate visits great libraries and halls in each varied locale and conducts a romance of which he knows – but doesn’t care – his aunt will not approve.

4 / 5
It is so very rare that I find a good novella that I actually enjoy; Mightier Than The Sword was one of these. I picked it up almost solely because of the cover, not realising that it was a novella and not really knowing what it was about. This tale with an unnamed narrator, an empress of an aunt, monks, and political skulduggery was an excellent quick read.

“It’s those wretched pirates.” She made the dreaded Land and Sea Raider sound like a butcher who persisted in overcharging for sausages

Our nameless narrator is called before his aunt, the empress, to be scolded like a naughty little boy before sent off to deal with some devilishly annoying pirates that keep raiding monasteries. It’s a simple enough foundation for a story and it works impressively well.
The problems I normally have with novellas include:
To name but a few. Parker managed to make me feel really attached to our narrator, and he doesn’t even have a name! That’s some good writing. The writing style is probably behind this; Mightier Than The Sword is written in first person and it manages to be descriptive, informative, witty, and genuinely amusing. All the characters, even the ones that only get a few pages worth of appearance, seem like genuine people.

“What in God’s name possessed you to spend six million on a house for a prostitute who refuses to marry you?” I grinned feebly. “It was the middle of the night”

The plot was simple: our narrator obeys his aunt and takes a handful of soldiers to go root out the problem destabilising the empire. Unfortunately, nobody knows who the pirates actually are and none of the nobility or monks he meets are particularly helpful. There’s a fairly even mix between political goings on and action packed, bloody scenes. The ending was also very natural and quite amusing, but the world building probably could have done with a touch more explanation. Unfortunately, my eBook copy didn’t have a map, which would have been nice.
Overall, I recommend this novella is a great short fantasy. The main highlight is the author’s lovely writing style and the great narrator.