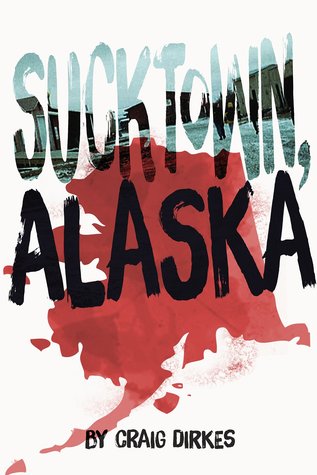 That was the only way in – by plane. No roads connected Kusko to Anchorage, or to anywhere in civilisation.  That idea – the remoteness of the place – intrigued me.

Freshman year, Eddie Ashford had it all. Friends, parties, Taco Bell. He enjoyed it, reveled in it even. And he flunked out. Now he wants to redeem himself. Has to. He takes a job in tiny Kusko, Alaska, and promises to stay a year. His intentions are pure, but soon he’s lonely, low on cash, and desperate to escape the tundra.

2.5 / 5
Eddie Ashford failed the first semester of university. In order to redeem himself in the eyes of the university admissions department, he takes up a job working for the Delta Patriot, a paper published in the tiny town of Kusko in rural Alaska. It’s a coming of age sort of story and prominently considers drugs and rural life. I couldn’t stand the main character, Eddie, but I loved the setting and all the details about what life is like in a place as wild as the Yukon Delta National Wildlife Refuge.

I was glad he swore. Working at the Delta Patriot would be my first real job, and I didn’t know the swearing rules at real jobs.

What I did like was the journalism focus and the setting. I don’t know much about America at all, let alone Alaska. Eddie moves from Anchorage to Kusko, a small town on the ice fields, and the newspaper he writes for is delivered all across the YK Delta, an area covering many small Native villages. There’s a lot of hunting, fishing, and dog sledding or “mushing” as well as detailed information about what living in a place like Kusko might be like; to be uneducated eye, the book seems well researched. The stories that Eddie works on are sprinkled throughout the book and I liked reading about the newspaper process and reporting job.

My ding dong went from zero to boner faster than a car’s airbag can deploy. I untucked my red flannel shirt to hide it.

Eddie is an eighteen year old boy and the way he is written as thinking about women is frankly a little disturbing. Particularly when most of the women he encounters are high-school girls. He meets a high-school girl and calls her “exotic“, ogles the “amazing bounty of her chest”, and thinks about her “perky pooper”, which is just about the weirdest term for butt I’ve ever heard. It’s demeaning and uncomfortable to read and was one of the aspects I hated the most about Sucktown, Alaska, and Eddie. It’s also just really weird: “real jiggle farm” and “honkerburgers”, really?

When Taylor’s friends imply that Taylor isn’t interested in Eddie, he storms off angrily. Essentially, Eddie is neither a great guy or an interesting one: he whines a lot about how broke he is, how boring Kusko is after he flunked out of college, how Taylor doesn’t like him back. The weird thing is, Eddie isn’t really like this at the start. He seems a bit more mature, taking responsibility for his college failure, determined to make a good impression on his boss, and get his articles in on time. He passes up alcohol and weed because he needs to stay on the straight and narrow to get back into college. But at some point this rather likeable character devolves into a immature brat who whines that a girl he hung out with once isn’t interested in his “ding dong”.

In less than a year I went from normal suburban kid to bush-living, marijuana-dealing, murderer-dodging, broke-ass fool.

The ending was decent. I didn’t really suspect what was happening and it took on a few twists and turns. It did feel a bit too jammy and cliche, but I liked it nonetheless. I’m in a bit of a mixed-mind about the whole book – I liked the writing but hated the way Eddie thought and spoke about women, I liked his character growth but had to wade through pages of him being a self-entitled brat, I thought the setting was great but a bit under-utilised.