Normally I take a photo of all the books I read this month, but
unfortunately I had to return a lot to the library, so here’s a pretty
picture instead

June has been a good month for me: I’ve been home, done lots of reading, and had the details of my summer internship confirmed, which I’m very much excited about. After a month off of university I’m ready to get some daily structure back into my life!
As of a few days ago, I’ve beaten my reading goal, a hundred books, for 2017 before half of the year had passed! I’m super proud of myself, as last year I had “only” read 85 books. My new, revised goal is to make 150 books before the end of the year – I have been reading a more diverse range of books – dipping into the children’s and adult ends of the YA spectrum, and according to Goodreads I have generally be reading shorter books than I did last year, which might account for some of the change.

Maybe you’ve noticed that I’ve also been writing a chunk more “article” posts rather than book reviews this month. Whilst I think that book reviews are great, I thought my blog might benefit a lot from some more diverse posts – recommendation lists, posts about blogging and getting/reading ARCs; I’ve definitely enjoyed writing these kinds of posts and they’re a great way to raise awareness about less popular, less mainstream kinds of books! I hope you guys are enjoying the slight shift my blog is going through 🙂

Anyway, onto the books! 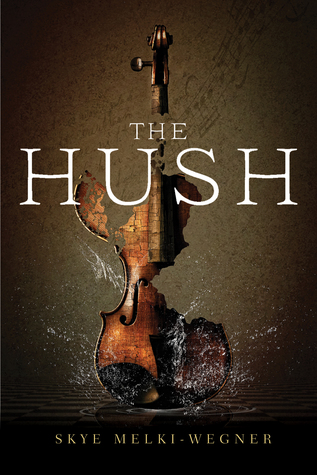 This was the Hush. Its rain was not water, but shadow: a rain of leftover sorcery

There are two things that I loved about The Hush: first, it’s essentially a group teen heist novel (think more YA Six of Crows), which I didn’t know when I picked it up, and secondly, the idea of the Song, Music, and the Hush is super cool. This book was fantastic and, though it is a standalone, I hope Melki-Wegner returns to write more in this universe.

The man. Chester Hays’ father has gone missing, leaving Chester on the road with his fiddle.

The woman. Susannah is a down-and-out criminal looking for revenge. Nineteen years old with a shock of red hair, a knife in her belt and a crew to command.

The world. Songshapers study Music, when ordinary musical ability and playing becomes magical. The Song threads its way throughout the world, the underlying rhythm of nature, the heartbeat of the universe, and to interfere with it through Music is a crime.

This book has got everything: great characters, a unique form of magic, action, fights, and a compelling plot.

Chester is on the road, searching every town for clues about his father and why he disappeared. But when he’s caught accidentally – and illegally – connecting with the Song as he plays his beloved fiddle, Chester is sentenced to death. Only a licensed Songshaper can bend music to their will. The axe is about to fall . . .

But there is someone else watching Chester. Someone who needs his special talents. Who can use him for their own ends. And who knows the secrets of The Hush, where there is no music, only deadly Echoes who will steal your soul. 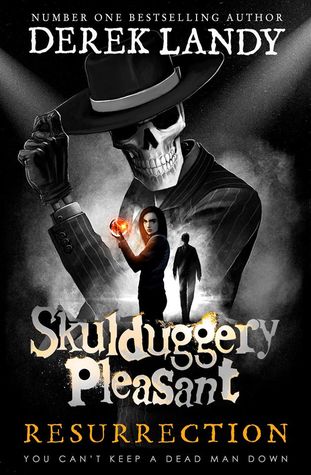 Valkyrie Cain is an older, broken woman. Valkyrie Cain lived for years with prophecies and worlds on her young shoulders and now she just wants to be left alone. I can’t much blame her. Meanwhile, Skulduggery is futilely trying to pretend that nothing is wrong, that a good case will take them back five years to when they were the dream duo, saving the world left and right.
Resurrection manages to balance this rather depressing, but realistic, outlook on Valkyrie and Skulduggery with good, Landy humour. The plot is entirely new, with new characters, rather than trying to rehash old characters and storylines. It’s a great addition to the series. It isn’t as intense and wide-spanning as The Dying of the Light, not having as many links and connections to the other books, but it is fun, clever, and very enjoyable with some new additions to the cast and a great look at how some of the characters have aged.
The writing is, I think, the highlight of this book. It’s so beautiful and thoughtful. There’s so many amazing quotes that I want to share: funny ones, philosophical ones, sad ones.

“Fight them. I’m begging you.”

“I thought you didn’t beg.”

“You’re my exception,” she said. “You always were.”

Dawn Of The Clans, Erin Hunter
I finished up the Dawn of the Clans series, a prequel series to Hunter’s children’s series Warriors. I found the ending pretty emotion and overall I enjoyed the series, a great way to reconnect with my childhood!

* * * * Am I Normal Yet? (The Spinster Club #1), Holly Bourne – Review
Evelyn Crane is getting better. She meets her therapist once a week, finally cuts her worries list down to a single page, and is lowering her medication for OCD and anxiety. It’s a great look at a teenage girl navigating her life whilst living with OCD. It made me laugh and cry and laugh whilst crying.
*  The Manifesto On How To Be Interesting, Holly Bourne –  Review
Bree is a failed seventeen year old writer who is instantly dislikable and this book prominently features (but does not support) a student-teacher relationship that I found sickening to read. It’s a doorstopper of a YA novel that’s rather vapid and uninspired.
* *  Tribute, Ellen Rennder –  Review
Tribute was fun in parts; there was mind magic and thief clans and a little bit of mystery. But there’s also instalove; Aidan and Zara are professing undying love after speaking twice. For about three minutes. Yawn.

* * The One (The Selection #3), Kiera Cass – Review
The best of The Selection trilogy with more action and rebels, and though the ending was a bit too fairy-tale, I did like it. However, there’s still that pesky love triangle hanging around and the moment I put the book down, I could recall absolutely nothing that happened in the middle of the book.
* * * .5 Half Bad, Sally Green –  Review
I don’t normally enjoy books about witches, werewolves, or vampires (with the obvious exception of Harry Potter), but I enjoyed this book a surprising amount. It’s dark, twisted, and well written with a solid cast. The only real problem I had is making all the evil, murderous Black witches literally black.
* *  The Winner’s Crime (The Winner’s Trilogy, Marie Rutkoski) – Review
Whilst I enjoyed The Winner’s Curse, The Winner’s Crime was relatively boring. There’s lots of romantic angst and a load of political manoeuvrings that I didn’t really understand, somehow related to bets made about Kestrel’s wedding dress.

* * The Orchid Caper, Connie B. Dowell – Review
A YA group heist novel focused around Ian, who’s trying to get a one-up on his brother by stealing something of value to him, who recruits Darlene as part of his team. It’s reasonably funny but would have worked better as a children’s novel.
*  Trial By Fire, Lore Graham – Review
A superhero novella featuring Elena, or Fuego, who joins the Hollywood Heroes as their newest recruit. This book was very haphazard and had a very confused tone: the writing and plot were suitable for a children’s novel, but there were two very explicit sex scenes. Bonus points for diversity.
* * .5  Sucktown, Alaska – Review
Eddie Ashford failed the first semester of university so he takes up a job working for the Delta Patriot in the tiny town of Kusko in rural Alaska. It’s a coming of age sort of story; whilst I couldn’t stand Eddie I loved the setting.

* * * .5 The Hundredth Queen, Emily King – Review
Kalinda is raised in a mountain temple when Rajah Tarek arrives at the temple and chooses her as his hundredth wife. There’s a good mix of lots of good fantasy elements: loads of fighting, magic, rebellion, mythology, and, of course, love. Problems include the romance and Kalinda.
* * * Body Parts, Jessica Kapp – Review
Tabitha Rhodes, orphaned at six, is raised in a centre which encourages her to be in tip-top physical condition. But instead of being adopted, she wakes up in hospital about to be harvested for her organs, and the rescue team is here. It’s fun and reminded me of Shusterman’s Unwind.
* * * * Eleanor Oliphant is Completely Fine, Gail Honeyman – Review
Eleanor Oliphant is fine, or that’s what she tells herself. She’s got her routine: work, weekends and vodka, talking to Mummy on Wednesdays. Two things happen to change her life. This book is sad and touching and real; it’s about good days and bad days and better days.

* * * *  Fallen Flame, J. Miller – Review
Vala was born with charred skin on an island where magic hasn’t existed for almost two hundred years. She serves her prince as a bodyguard, but when an embassy comes from a neighbouring kingdom her life changes. Great main character, magic, and finally some decent, realistic fantasy romance. Great read!

* * *  Flame In The Mist, Renee Ahdieh – Review
Very loosely a Mulan retelling in which Mariko is attacked by bandits on her way to marry the second in line to the emperor’s throne. Lost in a creepy forest, Mariko endeavours to infiltrate the Black Clan, who she believes is responsible for her attempted murder. Fun and solid book, downsides include very annoying prose and a weirdly philosophical group of boys.

The Power of Three, Erin Hunter
The third series in the Warrior Cats universe featuring the grandchildren of Firestar: Jaypaw, a blind medicine cat apprentice, Hollypaw, concerned with the Warrior Code, and Lionpaw, a might fighter. I’m re-reading these but don’t actually remember very much of what happens throughout the six books, just the big plot twist at the end!