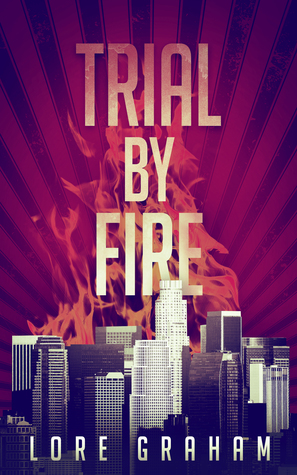 Nothing captures the human imagination more than apocalypse, the end of times

All Elena wants to do in join the Hollywood Heroes, meet her compatriots, and slowly get into the swing of saving the world. What she gets instead is Consequence, who took out a full-page ad in the LA Times threatening to bring about an apocalypse.
Between villainous masterminds, her fellow heroes, and her attraction to group leader Lacy, Elena is going to have to learn fast how to be a Hollywood Hero or the only thing she’ll have to worry about is how to survive a post-apocalyptic world.

I hadn’t realised that this was a novella when I downloaded it, otherwise I would have given Trial By Fire a miss. So part of my dislike of this book was it’s not you, it’s me. Everything felt rushed: the explanations, the romance, the character building, the antagonist. I didn’t feel like most of it made much sense and the book had a confused tone: the writing and plot were suitable for a children’s novel, but there were two very explicit sex scenes.

“I can run twice as fast as a cheetah,” Lacy said teasingly. ‘There’s no keeping up with me”

We meet Elena, our main character, as she is in an interview with the Hollywood Heroes, a group of superheroes dedicated to fighting crime. It seems that a very small proportion of people are born with superpowers, though there is no explanation or exploration as to how this might be or the exact “rules” of this (most superheroes in Trial By Fire have one power, but the villain has at least two). Elena has the power of fire. The Hollywood Heroes have about eight members, but we only really meet two: Archive, the leader, and Lacy.
One of the first things that bugged me was that Elena joined the group on the basis of her powers and motives. She isn’t said to have any previous crime fighting experience but is thrown straight into a dangerous situation with criminals without any sort of training or group exercises like you might expect. Instead there is several scenes and days devoted to her costume designing. Then there’s the villain plot itself which involves Elena and Lacy skulking around compounds and the like wearing masks and trying to be inconspicuous. I just found the whole endeavour to be a touch ridiculous and implausible.

Alongside this action plotline, there is the romance between Elena and Lacy. Graham has written quite a diverse book, with a f/f relationship and Lacy is a transgender woman (male to female, for those not down with the vocab!). Most of the diversity is just in passing, a mention of brown skin tone, but it was appreciated nonetheless. The romance itself was good on paper; the two had a few dates, spent time together, you could trace the buildup. But I found both character just so flat; this is partly due to the nature of the novella, but it still meant I didn’t engage emotionally with the romance. Neither was I expecting it to play such a heavy role given the synopsis of the book. Then there’s the couple of very explicit sex scenes with seemed at such odds to the tone of the book (I though it was written for children or quite YA – not the case); I did, however, appreciate the frank conversation the two had about their sexual preferences, although Lacy keeps referring to her penis as a clit, which I think is frankly unhelpful given the general lack of education concerning female genitalia. Other than this I felt that Lacy’s trans identity was handled well and respectfully.
Overall, I didn’t enjoy Trial By Fire. It might be better enjoyed by someone with a more vested interest in superhero books or a fan of the novella form.
My thanks to Netgalley, the publisher, and the author for an ARC of this book.