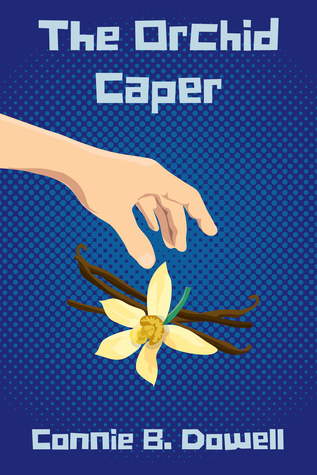 Midterms were a terrible time to begin planning a heist, but honestly, would there ever be a good one?

A down-on-her luck burglar, a trust fund college kid with something to prove. Will they outfox a master thief?
All eighteen-year-old Darlene wants is to rob the joint. College guy Ian comes home too soon. And some ill-timed flatulence brings them together. Darlene thinks she’s toast. Instead Ian gives her a job offer, leading a heist team to steal a rare species of vanilla orchid. Only catch, she’s swiping from one of the best thieves in the biz.

My biggest problem with The Orchid Caper was that it was marketed as a YA novel when it would have done much better as a children’s novel, I think, due to the rather simplistic plot. It’s a YA group heist novel focused around Ian, who’s trying to get a one-up on his brother by stealing something of value to him, who recruits Darlene after she unsuccessfully tries to burgle his house.

Wonderful. I’d thought with Darlene gone, surely we wouldn’t have any more flatulence issues. At least this monstrosity was silent

It was reasonably funny. Darlene is caught by Ian when attempting to rob his apartment because he comes home early, she jumps into a cupboard and then farts. Whilst amusing, it was one of the first scenes that indicated that this book might be more childish than adult. Then there’s the cast: Ian, a rich boy at college, Darlene, teen thief a little lost in life, Chad, a college botanist, Clyde, an amateur ballet security guard, and Judy, Darlene’s cousin. The cast are one of the good points of the book; the characters have little unique details, like Clyde loving ballet, and differing voices. The book is written in first person and has lots of POVs, so many that it becomes annoying and frustrating. Whilst each character is distinct, all this first person makes it hard to connect with each character.
There are so many coincidences in this book you’ll be tripping over them. Darlene’s cousin is a computer expert, her sister’s boyfriend is a security guard, the guy down the hall is a botanist with a focus on orchids. The list goes on. There’s no great sense of depth because every vaguely interesting problem is solved within pages by a useful coincidence. The pacing is also a little slow at the start, but picks up in the second half when the heist actually takes place. Whilst faster and more action-packed, I didn’t think the heist was particularly well planned or realistic, but I may have just been spoiled by excellent heist novels like Six of Crows!
There is a nice focus on family and relationships. Darlene has tricky dealings with her sister who has been a thief since they were children, often manipulating Darlene into doing jobs for her. Then there’s Darlene’s father who owns a gas station and repair shop that are failing due to a lack of money, but her father won’t take out a bank loan or accept money from anyone. I liked the tight-knit nature of Darlene’s family and their complex goings-on.
Overall, I think The Orchid Caper would be a bigger hit with a younger audience. It’s funny and light-hearted, but not particularly clever.
My thanks to Netgalley, the publisher, and the author for an ARC of this book