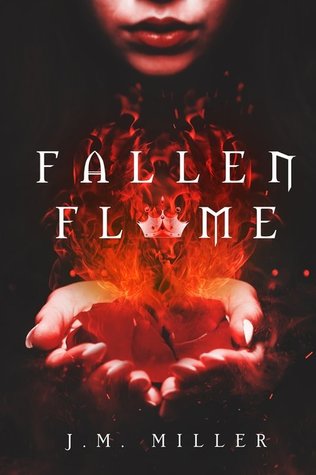 I lowered the one in my hands and tossed it onto another, watching my flame catch and spread over the ground, like a wave of fire, lighting it all

Nineteen years ago, on the island kingdom of Garlin, a girl was born. With charred skin as rough as rock, Vala was instantly feared. For how could one be scorched by magic when it had perished ages before?

Recognizing an asset, the royal family welcomed her on their Guard. Her detail: the prince. To watch. To protect. She has grown with him, lives her life for him. When the high kingdom’s princess comes to assess the prince, assassins of rival courtiers come to claim his life. One nearly succeeds in his mission. But with shadowy movements and charred skin like her own, Vala knows he is not like the rest.

4 / 5
Nineteen years ago, many years after a veil of fog went up across the ocean and magic vanished from the human lands, a girl with charred skin was born. A girl who looked like she’d been rolled in the dying embers of a fire. Vala is the Captain of the Prince’s Guard, and when assassin’s and courtiers land on Garlin Island, the action and intrigue in Fallen Flame really shine.

I stepped out of the tank, newly shed and exposed. The air kissed my red-orange skin with spiked lips as I watched the old charred flakes settle to the bottom of the tank

What I loved most about this book is Vala. She such a rarely wonderfully mature character; she wears a hooded cloak to cover her scarred, charcoal face but she is not bitter. She wonders what she is and why she was born, she thinks wistfully about who she might have been, but there are no long self-pitying monologues that I have come to expect from YA characters. The height of Vala’s arc is not her putting on a dress and realising that, after all, she’s beautiful (a trope I really despise). Neither is she sassy, pushing authority and flouting rules willy-nilly.

A distant ache panged somewhere inside, the longing to stay with Caulden twisting into something different, something new. A raw need to know more about myself, to see more than this island, to learn more about everything

Vala is thoughtful and she is, in one word, dutiful. She protects the Prince, she does what she genuinely thinks is best after careful thought. I love my rebellious girls, my Katniss Everdeen’s, my girls on fire, but I also love the ones that think, that swallow their pride, that do what is best rather than what they want. Vala is such a refreshing YA character and I loved her. Also she’s literally on fire in that when she bathes she goes all ember-y, and she’s definitely on fire on the battlefield.
She’s even got a romance I like. And. It involves two guys. And I liked it! Let’s set the scene: Vala has served Caulden since she was a child. He stands up for her and does not flinch at her skin and Vala is pretty sure that he loves her. She definitely loves him. As I started reading this I admit I rolled my eyes; here we go, I thought, the midnight trysts, the “oh I can’t love you but Vala you’re so special you’re not like other girls I’ll give up my crown for you lets run away together. That’s not what we get. Instead we get a young woman realising that there are some things you just can’t have and a transition is affections that is not so much a love triangle but a realistic progression.

My world was crumbling, all my years falling around me like heaps of inconsequential rubble. I had been nothing but loyal, honest. Dutiful.

What I didn’t like quite so much was the world building, mostly because I didn’t really get it. There is a foreign, otherworldly assassin. There’s a fog wall across the ocean which humans can’t pass through. There’s myths and legends and faeries that are all woven throughout the book but never really explained. I could have done with a little more clarity. To offset this, the plot is simple enough: a neighbouring island’s Queen and Princess visit hoping to arrange a marriage but there’s suspicious goings-on. It’s a good, classic plot and Miller’s first person writing style is just lovely.
Overall, Fallen Flame is a great fantasy read with a fantastic main character. The secondary characters are a bit lacking, but there’s lots of political intrigue, assassins, magic, and sword fights to spice things up.
My thanks to Netgalley, the publisher, and the author for an ARC of this book.