A good reading month! I also bought these nice fake flowers for props

July has been a pretty great month for me, all things considered. I started my new internship, of which I am now half way through, which is going really well. It’s part time, only twenty five hours a week, so I’ve got lots of time to do other things – I’ve started running again regularly to try and keep myself fit over the summer when I’m not doing Ju Jitsu as I do during term time.
I finally got around to reading Strange the Dreamer and it was just as amazing as everything I had heard; I absolutely loved it. Other than that, I didn’t have much luck with books this month 😦

Most of the other books I read this month were either two or three stars, which was a shame, but Strange the Dreamer was so great, it kind of made up for it. I did also make my way through the fourth Warriors series, which was great and kind of bittersweet.

It was a bit like that bit in Beauty and the Beast when the Beast dances with Belle. Except there was no Belle. And no music. And no candlelight. Just a beast.

I don’t often read books of the thriller variety, but this one was a special treat for me, mostly because there wasn’t that much actual thriller. It’s got all the staples of a classic YA boarding school story: rich kids, fancy buildings, pretentious British house names, privilege, power,  and bullying, and adds a little hint of thriller.
First, we have Greer. She’s a bit of an archetype initially: poor girl who gets scholarship to one of the most prestigious schools in England, doesn’t really fit in with all the rich kids and is excluded. Bennett gives Greer a splash of individual character by making her a complete film nut and she often describes scenes in terms of famous films, which is pretty cool and unique.
Joining Greer is Shafeen, tall, handsome and from Rajasthan in India, teased despite his moneyed background and branded with the moniker “Punjabi Playboy” despite being neither Punjabi nor a playboy. He’s my favourite character of the book: kind, chivalrous without being sexist, rich whilst being aware of what is has done for his life, sensible and headstrong.
When the outcasts accept Henry’s invitation to a weekend of blood sports, they aren’t quite sure what they’re getting in for. Shafeen, Chanel, and Greer all accept The Invitation for different reasons but as the trip goes on and the stakes get higher, they begin to think that there is something very wrong about Longcross Estate. That perhaps this hunt is not quite what they thought.
Official Synopsis:

Greer MacDonald is struggling to settle into the sixth form at the exclusive St. Aidan the Great boarding school. Just when she despairs of making friends Greer receives a mysterious invitation with three words embossed upon on it: huntin’ shootin’ fishin’.

When Greer joins the other chosen few at the ancient and sprawling Longcross Hall, she realises that Henry’s parents are not at home; the only adults present are a cohort of eerily compliant servants. The students are at the mercy of their capricious host, and, over the next three days, as the three bloodsports – hunting, shooting and fishing – become increasingly dark and twisted, Greer comes to the horrifying realisation that those being hunted are not wild game, but the very misfits Henry has brought with him from school

“It was impossible, of course. But when did that ever stop any dreamer from dreaming?”

With Strange the Dreamer I was so enveloped by the prose, so wrapped into the world that Taylor has crafted, that I was barely aware of even turning any pages (and very lovely pages they were too, blue-edged and everything). It’s a rare kind of book that can do that to me.
Strange the Dreamer is a fantasy novel at the more adult end of the YA spectrum; I might even comfortably class it as an adult novel. It blends together myths, monsters, dreams and tragedies into it’s beautiful prose. It’s about a boy who is raised in a library, a librarian who has a dream about a city lost two hundred years ago. The city of Weep whose name is not Weep, whose name, fifteen years ago, was wiped from the name of every human. Why? How? These are the questions that haunt Lazlo Strange.
It’s also about a girl with blue skin. Sarai: seventeen years old and a goddess and a girl and a demon all in one. It’s about an alchemist. About five orphaned children. About a secret that has kept a city closed for two hundred years. It’s about a man called Godslayer and the gods he slayed. It’s about dreams and destiny and love and fear.
Official Synopsis:

The dream chooses the dreamer, not the other way around—and Lazlo Strange, war orphan and junior librarian, has always feared that his dream chose poorly. Since he was five years old he’s been obsessed with the mythic lost city of Weep, but it would take someone bolder than he to cross half the world in search of it. Then a stunning opportunity presents itself, in the person of a hero called the Godslayer and a band of legendary warriors, and he has to seize his chance or lose his dream forever.

* * Girl Off The Grid, Jillian Dodd & Kenzie Harp – Review
Camille Caldwell, rich girl, fashion vlogger, and “anti-nature” person, gets a once-in-a-lifetime offer to go on an all expenses paid trip to Costa Rica. She’s sent with wildlife photographer Adam. It’s a light romance read without a lot of depth.
* *  Mountain, Ursula Pflug –  Review
Camden goes to a “healing camp”, a sort of festival / commune, with her wayward mother. One day Camden’s mother goes down to town in the truck and never comes back. This was a weird novella and not my sort of book at all.
* * *  Scythe, Neal Shusterman –  Review
In a world that has surpassed mortality where the only people who can truly kill or “glean” are the scythes, Citra and Rowan are taken on as apprentices. This book was really awesome but had some very slow parts and the romance was so unconvincing. 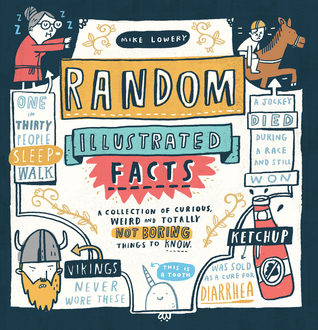 * * * The Dark Prophecy (Trials of Apollo #2), Rick Riordan
Better than it’s predecessor, The Dark Prophecy managed to make Apollo a lot less annoying, but he’s still kinda weird. The action is a bit more exciting and the cast benefits massively from Leo and Calypso.
* *  The Court of Broken Knives (Empires of Dust #2), Anna Smith Spark –  Review
A grimdark novel featuring battles and gods and guts and glory. Unfortunately, I didn’t really enjoy this book. Most of it’s flaws – too long, a bit verbose, weird writing style – can be attributed to being a debut novel or my own personal preference (because after Flame in the Mist I am so very done with short dramatic sentences).
* * * *  Random Illustrated Facts, Mike Lowry
This is an excellent coffee-table sort of book, cram packed with vibrant illustrations and weird and wonderful facts. The illustrations are cute and the style is consistent throughout; they’re detailed doodles, in full colour, and always related to the facts.

* * *   Cinder (The Lunar Chronicles #1), Marissa Meyer – Review
Cinder is a cyborg mechanic living under the roof of her step-mother in this, you guessed it, retelling of Cinderella. This book was fun to read and I loved Cinder, but the “twist” was obvious from miles away and it didn’t really make use of the setting New Beijing at all.

* * * *   One Of Us Is Lying, Karen McManus – Review
Five students go to detention, but only four come out. Simon was poised to reveal devastating secrets about all of them, mere hours before he dies. This book was amazing; McManus really got you inside the heads of the four and the pacing was superb.

Omen of the Stars, Erin Hunter
The fourth Warriors series focuses on Jayfeather, Lionblaze, and Dovewing as they face the threat of the Dark Forest and Tigerstar. We also get points of view from Ivypool and Flametail. I’d only ever read The Fourth Apprentice before, so the other five books we completely new to me; I’m not ashamed to say that there were a couple of tears in my eyes at the very end.

What books did you read this month? Tell me below!