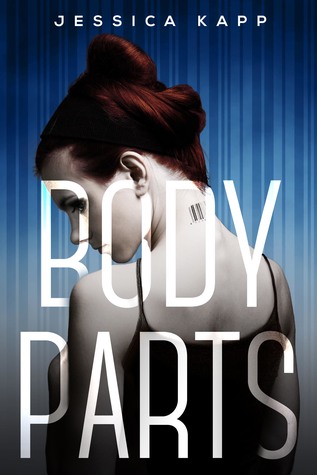 I’m angry I let my heart get caught up in the idea of having a foster family, for believing in the people who raised me

Raised in an elite foster center off the California coast, sixteen-year-old Tabitha’s been sculpted into a world-class athlete. Her trainers have told her she’ll need to be in top physical condition to be matched with a loving family, even though personal health has taken a backseat outside the training facility.
When Tabitha’s finally paired, instead of being taken to meet her new parents, she wakes up immobile on a hospital bed. Moments before she’s sliced open, a group of renegade teenagers rescues her, and she learns the real reason for her perfect health: PharmPerfect is using her foster program as a replacement factory for their pill-addicted clients’ failing organs.

3 / 5
I loved the idea behind Body Parts, it reminded me of Neil Shusterman’s book Unwind, which I greatly enjoyed. However, I found that this book dragged a bit in the middle where there was less action and more romance, and that as a character, Tabitha could be aggravating and make stupid decisions.

I’ll be a record on the wall, a memory in the minds of those who trained with me until they’re gone too

Tabitha Rhodes, orphaned at six, is being raised in a centre which encourages her to be in tip-top physical condition in order to maximise her chances of being adopted. But when they tell her, at age sixteen, that it’s finally happening instead of meeting a loving family she wakes up in hospital at a scene of chaos. Turns out she’s been raised only for the purpose of organ harvesting for the rich and wealthy who’ve ruined their organs by overuse of drugs supplied by conglomerate giant PharmPerfect, and the rescue team is here. Gavin and his rag-tag crew are breaking her out.
Tabitha joins Gavin’s group, which includes eight year old Mary who wasn’t rescued before her cornea was sliced off and Sasha, who was kept for three years in isolation until they found a recipient for her uterus. Now Tabitha is out and has learned the truth about the Centre she’s concerned for her old friends including best friend Paige and eighteen year old Parker, who is deeply and madly in love with Tabitha, but she doesn’t return the feeling.

I loved the beginning of the book. It was fast-paced and intriguing, full of suspense and action. After her break out, Kapp ramps up the story by adding a bit of mystery in; Tabitha isn’t sure who she can trust. There’s Gavin, a boy who has devoted himself to saving kids from the Centre but comes from a perfectly normal background, and Ry who’s always high and Tabitha makes the mistake of accepting drugs, which she thought were for her heart condition, from. Kenny is Gavin’s “mole” in the inside of the hospital, who Gavin claims is entirely on their side, but Tabitha knows is hiding something. It’s really easy to get sucked into Tabitha’s head, unsure who to trust and what exactly to believe.
But then the middle falters and is consumed by romantic tension. Tabitha is falling for Gavin who seems to like her back, but Gavin’s hanging around his childhood friend Cherry who is, obviously, an exceedingly beautiful blonde who is just so much more gorgeous than ugly red-headed Tabitha; there’s a big chunk of time dedicated to Tabitha’s jealous feelings, when I thought, realistically, she’d be more concerned about her friends that might go under the surgeon’s scalpel at any moment. Then, when the Cherry thing is resolved, there’s Parker, who Tabitha made a childhood pact with that if they both made it outside the Centre, they would give dating a shot. But now Tabitha has Gavin. What a dilemma.

“You’re a liability.  I can see it in your eyes. You insist on going to the hospital, but you have no idea the danger you’re putting everyone in by going inside that place”

I just didn’t care about the romance – Gavin seemed like a sweet, sensible guy and I suppose their getting together was quite sweet, but there was all this unnecessary, ridiculous tension and alpha-male posturing. Then there’s Tabitha herself, who I loved at the beginning, who takes a turn for the worse. She insists on going on rescue missions despite Gavin’s team being well-practiced and slick, and Tabitha virtually having PTSD and locking up at the sight of the hospital. For some ungodly reason she’s allowed to come and help break others out; Tabitha throws tantrums and sulks like a child and it was very irritating.
Body Parts picks up again towards the end with a lot more action and excitement, which I enjoyed. Although the ending left a few things unresolved and it was a bit too feel-good to seem realistic, I did like it. Body Parts is a great novel and I absolutely adored parts of it, but thought too much time was dedicated to unnecessary romantic tension.
My thanks to Netgalley, the publisher, and the author for an ARC of this book.