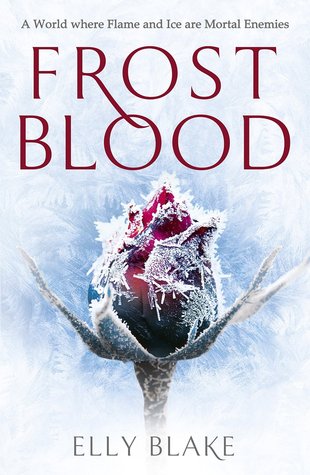 In a land governed by the cruel Frostblood ruling class, seventeen-year-old Ruby is a Fireblood who has spent most of her life hiding her ability to manipulate heat and light – until the day the soldiers come to raid her village and kill her mother. Ruby’s powers are unpredictable…and so are the feelings she has for Arcus, the scarred, mysterious Frostblood warrior who shares her goal to kill the Frost King, albeit for his own reasons.
*
1 / 5
In some ways I feel a touch sorry for YA fantasy writers; it can seem like everything has already been written. But then, just when I begin to despair, I’ll find a book that takes all those expectations and reverses them, or that skips straight past cliches into fresh imagination; recently I’ve read Red Sister by Mark Lawrence, Strange the Dreamer by Laini Taylor, and Red Rising by Pierce Brown and been absolutely blown away. Frostblood, unfortunately, was not that sort of book; instead it just seemed to accumulate cliches as I turned pages, snowballing into boredom.

“Face them all like a warrior, whether you are one or not”

We begin with a young woman, Ruby Otrera, who is an oppressed Fireblood living with her mother. She has power over fire, a crime on the island country of Tempesia where Frostbloods, who, you guessed it, have powers of frost and ice, rule. Whilst practicing her illegal fire magic, Ruby is spotted by some guards who kill most of her village including her mother. Captured by guards and kept in a prison, Ruby swears angry revenge against the imaginatively named Frost King, and is willing to do ~anything~ to get her revenge.

This involves being in cahoots with an old priest who is an adept Frostblood mage and a ~mysterious~ and ~sexy~ hooded young man named Arcus. Arcus is, you guessed it, the romantic interest with the “hate-each-other-at-first-glimpse” trope. He’s a Frostblood, she’s a Fireblood, can I make it anymore obvious? Ruby trains her powers, learns she’s part of a super powerful prophecy, plots against the system, and tries to take down the man. It’s not an imaginative plot, it doesn’t have any twists, and frankly, I was bored most of the way through.

Frostblood features the following cliches in no particular order: dead families, lost princes, prophecies, unwelcome powers, rebellions, self-described plain girl puts on dress and becomes gorgeous, “forbidden” romance, wise man mentor, elemental magic, evil oppressive ruler, the lurking evil. That’s all off the top of my head! The only one it manages to avoid is the love triangle.

When reading Frostblood I was reminded of Red Queen, since they have reasonably similar plots: young impoverished and oppressed woman discovers that she has magical powers that are hated by the ruling class and joins a rebellion plot. This, of course, is a common plot ever since The Hunger Games and beyond. Which made me stop and think, would I have liked Frostblood more if I had read it, say, five years ago? Not really, I concluded. Ruby was bland as vanilla ice cream and her romance was worse.

“It took years to build up this ice. You will melt it and then I will be broken”

I’ve read a couple of reviews praising their “steamy” and “slow building” romance, and thought I’d read another book. I was cringing at weird attempts at flirting, persistently calling Ruby things like “my little inferno” and “Lady Firebrand”, Ruby and Arcus being hot and cold with each other for no apparent reason, confessions of burning passion just pages after Arcus has been verbally abusive to her. I wouldn’t have given a damn if Arcus had fallen off a cliff, that’s how boring they were together. Like the plot, there is nothing new or novel to the romance.

After that pretty scathing appraisal, what did I like? I liked Blake’s attempt to create a mythology for her universe, however steeped in cliches about light, dark, prophecies, and wise women it was. I also liked a character that popped up near the end, Marella a noblewoman at court, who is sneaky and conniving. I really wasn’t sure what the deal was with her; at one point I even thought she was making moves on Ruby, which could have added some spice to Frostblood! Also, the second half had some pretty decent fight scenes. This is Blake’s debut novel and I do genuinely sense some sort of raw potential there that perhaps experience and further writing can bring.

Overall, Frostblood was a cliched mess that I stumbled through with half-lidded eyes. There’s nothing particularly bad about it, it’s just so bland, so generic.