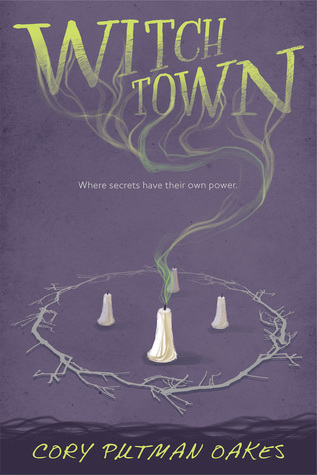 “Welcome home!” she said grandly. I managed only a weak smile in return. Because I knew that we hadn’t come to make Witchtown our home.

We had come to rob it.

When sixteen-year-old Macie O’Sullivan and her masterfully manipulative mother Aubra arrive at the gates of Witchtown—the most famous and mysterious witch-only haven in the world—they have one goal in mind: to rob it for all it’s worth.
But that plan derails when Macie and Aubra start to dig deeper into Witchtown’s history and uncover that there is more to the quirky haven than meets the eye. Exploring the haven by herself, Macie finds that secrets are worth more than money in Witchtown. Secrets have their own power.

3 / 5
Perhaps surprisingly, I didn’t pick up Witchtown because of the witches but because it promised a heist: a mother and daughter rock up to Witchtown, a haven for witches, intending to rob it blind. There wasn’t actually much focus on said heist, instead you get witchyness, an abusive mother (who is condemned for being so), romance, and friendships. It was a good, fun book, but I thought it could have pushed a bit deeper in terms of the secondary characters and the themes.

We’re all misfits here. Refugees from the real world.

There are three kinds of witch: Naturals, rare witches who are born with power at their crooked fingertips, Learneds, an ordinary person who has learned to channel magic, the most common type, and Voids, witches who have burnt themselves out. For no particularly explained reason, Voids are feared and outcast from society with brands from hot pokers on their faces! I felt like such a punishment really deserved a proper explanation, but apparently not.
Macie is our main character, a sixteen year old girl who has never had a real home. She and her mother have been on the move for as long as she can remember, robbing witch Havens. They stay just long enough to find out where the money is, rob everyone blind, and then Aubry, Macie’s mother and a Natural witch, wipes them from everyone’s memory.
This makes Macie an interesting character; she’s sort of devoid of a past, of a history, with no one to remember her. No friends, little family, and no place to call home. She’s also a Void, unable to channel magic, which makes her dependent upon her abusive mother to protect her and her secret. I thought Macie was a great character, but that too much of her was wound up in romancesboth past and present. In her past is Rafe, who no longer remembers her. Their story is revealed through memories that are interspersed throughout her interactions with good-boy Kellen, her new love interest.

“Haven’t I always protected you?” she asked. “Hasn’t it always been you and me?”

I took a breath instead of answering. Separately, those two statements were accurate. But together, they seemed to mean something more. Something that wasn’t quite true.

Like I said, unfortunately there isn’t actually much heist going on. It’s a semi-prominent theme throughout the first half of the book, which then pales to the background as Macie’s turbulent relationship with her mother comes to the fore, as well as her interactions with her new friends and her dealings with a poltergeist. There’s also the tantalising hints of another subplot: Macie buys the Depot, a shop which she intends to run. Unfortunately, she never really does this and it’s something I would have really liked to see.
Overall, Witchtown is a bit light on the elements that the synopsis promises, but has richness in its main character Macie and her new Witchtown friends. There’s lots of little plots going on, some of which are never properly resolved, which give the book flavour.