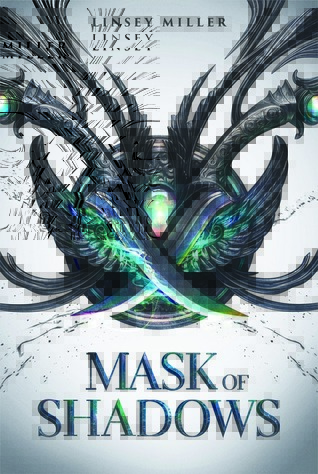 Sallot Leon is a thief, and a good one at that. But gender fluid Sal wants nothing more than to escape the drudgery of life as a highway robber and get closer to the upper-class―and the nobles who destroyed their home.
When Sal steals a flyer for an audition to become a member of The Left Hand―the Queen’s personal assassins, named after the rings she wears―Sal jumps at the chance to infiltrate the court and get revenge.
But the audition is a fight to the death filled with clever circus acrobats, lethal apothecaries, and vicious ex-soldiers. A childhood as a common criminal hardly prepared Sal for the trials. And as Sal succeeds in the competition, and wins the heart of Elise, an intriguing scribe at court, they start to dream of a new life and a different future, but one that Sal can have only if they survive.

I had very high hopes for Linsey Miller’s debut novel and, on the whole, I was a little disappointed. Whilst there’s intrigue, assassinations, politics, a competition (there’s very little I love more than game plots – see A Gathering of Shadows), and a reasonably well-developed main character, Sallot Leon, the book feels rough. I must say that Sallot just sounds like shallot, which is not even close to be as cool a name as Sal.
The novel opens with Sal doing their thing as a highway robber. The writing is good, though the dialogue is a bit clunky. I was slightly concerned that the plot might turn out like Throne of Glass – there’s a competition to become an assassin, a tough character with a tragic past – but fortunately these concerns are soon swept away. There are initial hints to Miller’s world building, mentions of runes, magic and shadows, as well as a civil war and impending trouble. All exciting stuff. There is little explanation of these at the start, possibly to avoid clunky info-dumping, but I did feel a little confused until about half-way in. Frankly, even by the end of the book I still didn’t really understand how Miller’s runes and magic system functioned!
Quite swiftly, within a dozen or so pages, the plot moves on to the main element: the competition for the opportunity to be the fourth assassin, Opal, of the Queen’s left hand (does she only have four fingers?). The other three assassins, Ruby, Amethyst, and Emerald, oversee the competition. Ruby has the most memorable personality whereas Amethyst and Emerald are a little too interchangeable. Everyone has scars and is super muscular. Now, to enter the competition, Sal must leave the criminal gang they belong to and bring a token worthy of an assassin. I found this scene a touch unrealistic. Sal takes the life of gang leader Grell, a man they have served under since childhood, who takes people’s fingers on a whim. Yet Sal has no issues betraying him, a man who scares everyone else witless, chopping off his hand with no real difficultly all within hours of learning about the competition!
Where this book gets good is the competition itself. Sal is competitor number 23, and this section is abound with plots, lessons, and murders. Three of my favourite things. Winding alongside this narrative arc is Sal’s underlying motive: revenge for their country, Nacea, which was decimated during the civil war, and love for the Queen. There’s also the delightful building up of Sal’s relationship with their maid, Maud, and the fledgling romance with Elise, Sal’s tutor. Elise is charming, beautiful, and a scholar to boot. Their meeting is delightful. The romance itself, however, seems a little confused. It seems to stray into various cliches and paradigms: it is vaguely forbidden because of the disparity in social standing and Elise’s father, it is sweet and slow building, and then passionate. I felt like Miller couldn’t quite settle on the kind of romance she wanted to tell and instead varied between kinds and it ends up being a bit unsatisfying.
Neither were Sal’s relationships with the other competitors particularly well-developed. We get it, they’re all trying to kill each other, so there aren’t any particularly close relationships. The fact that they are only ever called by numbers makes it a little hard to tell Two, Four, Five, Eleven, Fifteen and a few more, characters that are supposed to be notable, apart. I had a few moments where a character popped up and I thought they had already been killed. There’s also the fact that Sal takes their mask off at one point and none of the other competitors recognised them. I think if I spent a few weeks in close proximity with someone in a mask, I’d recognise their body shape and appearance even without it.
Then there is Sal. I applaud the author for writing a genderfluid person of colour (Sal is described as having “russet-toned skin”) as diversity in books is something I prize. This isn’t a novel about being genderfluid, it just has a character who happens to be so. I only wish Sal’s identity wasn’t so entrenched in sexist stereotypes about what it is to be a man or woman. Miller manages to avoid the classic clunky information dump and instead opts to only bring it up concerning clothes and their relation to pronouns. Consistently Sal says things like “I dress how I like to be addressed – he, she, or they” or “You can call me she when I dress like this. I dress how I am” (whilst wearing a dress, in which Sal twirls a lot) the implication here obviously being that a woman is a person in a dress… There are more examples. Interestingly, the blurb uses “they” for Sal (which is why I have used it in this review), yet Sal snaps at people using “they”, saying “address me however I look”, as though there is a way to look like a woman (there isn’t). Whilst I appreciate the author’s attempt to write a diverse character, this was not the way to do it. One’s identity should not be built on shoving other people into gender roles.
The last 10% or so of the book was the crowning jewel for me. The emotions were ramped up and this is where Miller’s writing truly shone – I could feel the passion in the words, I could feel Sal. I mean look at this:

I would kill the lords whose heritage was built on war and hate, and I would never be free of it, but the world would be free of them.

I was uncertain about Sal’s motive before – they seem torn between revenge, duty to the Queen, and personal improvement at various points in the plot – but now I have no doubt. It’s definitely revenge. The Queen also finally shows the spine I’d been waiting for:

“I am nothing like them. The decisions I made, everything I gave up, I did it for you, for each and every one of you, and you have no idea of the costs. You may be able to repay your debt in blood, but I’ll take mine to the pyre.“

A pet peeve of mine is when a character is so -sassy- and disrespectful to someone who, realistically, they ought to be in fear and awe of. This woman has united countries and ordered deaths! I’d be on my knees and yet previously the Queen had seemingly given Sal a free pass to be a cliche, irritating snob. So when I read this bit I was immensely pleased. Where had this stunning writing been for the rest of the book? The rest of the writing was fine, but the last few pages were excellent! Miller sets up perfectly for the sequel.
Overall, the plot was based on something I love (a game/competition) so I was fairly sure I would enjoy this. It’s not a particularly original book and it could have massively benefited from some more explanation of the world and less dependence on gender roles, but I was pleased with the fast-paced plot, the writing, and the exciting end.

My thanks Netgalley for providing me with a copy of this book in exchange for an honest review.