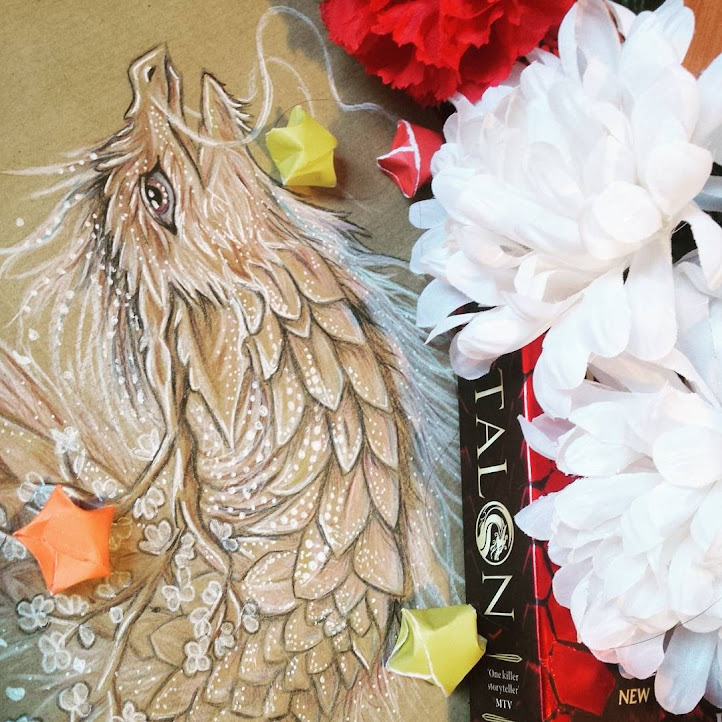 I’ve let my Instagram fall to the wayside this month, will do something about that!

August has been a funny month: great for my personal life, but not great for my reading life. I’ve had a big string of two and three star books, books that are okay, there’s nothing really wrong with them, I just had zero interest or emotional feeling when reading. Then, right at the end of the month, I finally got some fantastic reads!
I’m all packed up and ready to go on a dog walking holiday with my family and, needless to say, I’ve got some books packed. I’m hoping to finally read Nevernight, Three Dark Crowns (mostly because I just got approved for the sequel, One Dark Throne…), and A Closed and Common Orbit, the sequel to an absolutely amazing read The Long Way To A Small Angry Planet by Becky Chambers.

Babel pushes us over cliffs and expects us to fly. Sometimes we do.

This book completely blew me away. It reminded me a little of Ender’s Game – kids recruited for some mission in space by a vaguely nefarious company, set against each other in a series of games, always loomed over by a massive scoreboard – and whilst Ender’s Game does have a massive twist near the end, I enjoyed Nyxia a heck of a lot more.

We meet Emmett Atwater as he boards a lightship and signs his contract with Babel Corporation. He’s going to fly to Eden to mine a substance called Nyxia, an inky black substance that can be manipulated by the mind of the user. Babel has recruited ten youngsters to board Genesis 11, mine Nyxia on Eden, and in return they make an absolute fortune. The catch? Babel only needs eight people, so the teenagers will be pitted against each other in competition – tests of strength, fighting ability, tactics, Nyxia manipulation, swimming, running – and those who fail will be sent home with a small cash prize.

Emmett is a young black guy from Detroit, his mother has cancer and his father can barely make ends meet. His family has worked themselves to the bone, generation after generation, for a better life, sacrificed chances over and over for family, until now. When Emmett might finally be able to shed the chains the Atwater family has borne since slavery, and lift them out of poverty. Emmett’s an imperfect, human character. He’s driven and kind and wary and angry and he’s got duty carved into his bones and family written in his blood.

The rest of the cast is just as amazing. Nyxia is definitely going to be one of my favourite reads of the year.

Emmett Atwater isn’t just leaving Detroit; he’s leaving Earth. Why the Babel Corporation recruited him is a mystery, but the number of zeroes on their contract has him boarding their lightship and hoping to return to Earth with enough money to take care of his family. Forever.
Before long, Emmett discovers that he is one of ten recruits, all of whom have troubled pasts and are a long way from home. Now each recruit must earn the right to travel down to the planet of Eden–a planet that Babel has kept hidden–where they will mine a substance called Nyxia that has quietly become the most valuable material in the universe. But Babel’s ship is full of secrets. And Emmett will face the ultimate choice: win the fortune at any cost, or find a way to fight that won’t forever compromise what it means to be human.

Everyone believed that Diabolics were fearless, but in my earliest years, all I knew was fear

For some reason, perhaps I’d previously read a bad review, I wasn’t expecting much when I opened The Diabolic. I was completely wrong. This book was amazing and it took my breath away. The Diabolic is brutal and clever and full of conspiracies, power plays, and revolution. It’s such an inventive world, so rich in characters and politics, with the character of Nemesis at the fore.

Nemesis dan Impyrean doesn’t give a damn about the fact that the known universe is ruled by a tyrannical Emperor or that scientific enquiry is forbidden. Her only concern, the reason she was made and trained and tortured and treated as a wild animal, is the protection of Sidonia von Impyrean, the Heir of the Impyrean family.

I loved Nemesis, particularly at the start of the novel. She was unfeeling (except for her feelings towards Sidonia), methodical, dangerous, and she was believable. What I did not love was the romance – which I thought was both cliche and uninspired – but the rest of the novel blew me away, from the writing to the world building and the characters. Absolutely recommend to those that like more adult YA or novels set in space.
Official Synopsis:

Nemesis is a Diabolic. Created to protect a galactic Senator’s daughter, Sidonia. There’s no one Nemesis wouldn’t kill to keep her safe. But when the power-mad Emperor summons Sidonia to the galactic court as a hostage, there is only one way for Nemesis to protect Sidonia. She must become her.
Now one of the galaxy’s most dangerous weapons is masquerading in a world of corruption and Nemesis has to hide her true abilities or risk everything. As the Empire begins to fracture and rebellion looms closer, Nemesis learns that there is something stronger than her deadly force: the one thing she’s been told she doesn’t have – humanity. And, amidst all the danger, action and intrigue, her humanity might be the only thing that can save her, Sidonia and the entire Empire

* Frostblood (Frostblood Saga #1), Elly Blake – Review
Frostblood just seemed to accumulate cliches as I turned pages, snowballing into boredom. It focuses on a young girl called Ruby, a Fireblood in a world of Frostbloods, who is captured. This book seems to contain every YA cliche ever, managing only to omit a love triangle.
* Scourge (Darkhurst #1), Gail Z. Martin –  Review
The three Valmonde brothers: Corran, Rigan, and Kell, are undertakers in a city ravaged by monsters. Scourge is about monsters, brothers and family, magic and oppression, trading and politics, but somehow manages to be very tedious to read.
* * *  This Body Won’t Break (O-Negative #1), Lea McKee –  Review
This book had such a strong voice! I loved Joanna, it’s just a shame that the plot to This Body Won’t Break was so incredibly similar to another book I read recently: Body Parts. This also turned out to be only one third of a whole book.

* * * Fireblood (Frostblood Saga #2), Elly Blake – Review
From the very first page of Fireblood I could tell that, as a writer, Blake had improved massively. The writing style was so much better! Whilst the plot was still bland and full of tropes, Ruby got a bit of spice and the writing was just so much more pleasant to read.
* * * * Tarnished City (Dark Gifts #2), Vic James – Review
Leaps and bounds better than Gilded Cage, the first book in this series. It’s more critical of power and slavery, more developed in it’s exploration of morally dubious characters like Gavar and Silyen, and far more emotionally impactful.
* * *  The Epic Crush of Genie Lo, F. C. Lee –  Review
Inventive, funny, and based in Chinese folklore and a legend I was entirely unfamiliar with. Featuring Genie Lo, an ancient reincarnated spirit in the form of a sixteen year old American girl, struggling to prepare to get into Ivy League schools whilst the demons of hell are intent on destroying her life.

* * * Magpie’s Song (IronHeart Chronicles #1), Allison Pang – Review
Pang’s writing is simply gorgeous. There’s this great sense of character in Maggy and a really cool dystopia and steampunk vibe in the book. It was a bit of an unnecessarily complicated book, but it was really imaginative.
* * *  The Management Style of the Supreme Beings, Tom Holt – Review
I thought this was one of those slightly weird self-help books judging by the cover. Obviously, this is intentional, and the content of The Management Style of the Supreme Beings is every bit as weird as its cover. I’ve never really read anything like it.
* * *  The False Prince, Jennifer Nielsen – Review
This was the kind of book I would have loved when I was 10 – a snarky young boy who is good at sneaking around, a man with suspicious motives, and a shot for a poor orphaned boy to become a prince. However, the entire premise of the book was utterly absurd.

* * * Witchtown, Cory Putnam Oakes – Review
Witchtown promised a heist: a mother and daughter rock up to Witchtown, a haven for witches, intending to rob it blind. There wasn’t actually much focus on said heist, instead you get witchyness, an abusive mother (who is condemned for being so), romance, and friendships.
* * Antisocial, Heidi Cullinan – Review
Antisocial is a male/male romance novel that reads like a fanfiction with original characters, which is by no means a bad thing. Whilst it tackles some difficult topics, it does get really sexual, and Xander and Skylar are really, weirdly obsessed with Japan.
* * My Side of the Diamond, Sally Gardner – Review
I’m not really an alien book person: books about UFOs and strange government programmes and weird aliens impersonating humans, all really not my thing. Which is, weirdly, exactly what My Side of the Diamond turned out to be.

* * I Am Traitor, Sif Sigmarsdottir – Review
I Am Traitor was quite a confusing read, but definitely imaginative: teenagers are being abducted by aliens and nobody is quite sure why. I didn’t connect very well with main character, a fourteen year old girl who is very obsessed with having her first kiss.