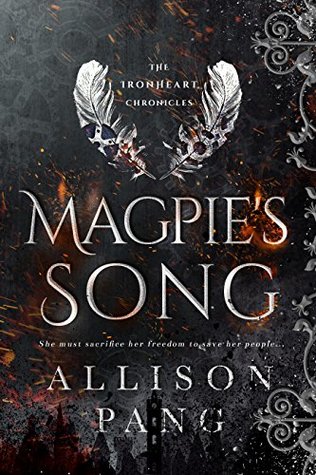 In the slums of BrightStone, Moon Children are worth less than the scrap they must collect to survive. It doesn’t matter that these abandoned half-breeds are part-Meridian with their ancestors hailing from the technologically advanced city that floats above the once-thriving, now plague-ridden BrightStone. Instead they are rejected by both their ancestral societies and forced to live on the outskirts of civilization, joining clans simply to survive.
Nineteen-year-old Raggy Maggy is no different, despite the mysterious heart-shaped panel that covers her chest. Or at least she wasn’t… Not until her chance discovery of a Meridian-built clockwork dragon—and its murdered owner. When the Inquestors policing the city find Maggy at the scene of the crime, she quickly turns into their prime suspect.

My first thought when reading Magpie’s Song was that it was an unnecessarily complicated book. I did get that impression from the synopsis, but thought it would become slightly clearer in the book; Magpie’s Song is a short book and could really have benefited from some more exposition. However, in all other respects, Pang’s writing is simply gorgeous. There’s this great sense of character in Maggy and a really cool dystopia and steampunk vibe.

As far as I could gather, there is a city, BrightStone, inhabited by normal people. Floating above BrightStone is another city, Meridian, inhabited by another race (species?) called the Meridians; their skin glows, that’s all I really got about them. Moon Children are the result of a union between a Meridian and a human, recognisable by the way all their hair goes white when they reach puberty. Moon Children are exiled to live in one of three clans (more accurately, gangs) that scavenge the junkyards for scraps to survive.
On top of all this there is a disease in BrightStone, the Rot. Having finished the book, I’m still not quite sure what having the Rot actually does to you. At first I thought it made you into a zombie, but later evidence indicates that a person can survive for longer via blood transfusions, so I think it just sort of puts you in a deathly state. Either way, those that get the Rot are condemned to the Pits in the company of a Moon Child who is selected via a system of “Tithing”, enforced by Inquestors – a sort of Meridian law enforcement. Added to this complex background information, there’s a weaving web of lies, secrecy, and betrayal that I couldn’t quite follow.

“The bones of your arrogance will crush you,” I cough. “And I’m going to dance them into dust”

But I’m getting ahead of myself. Our eyes to the world of BrightStone is nineteen year old Raggy Maggy, a Moon Child who belongs to one of the three clans. She and her younger friend Sparrow find a clockwork dragon whilst scavenging. Oh, and a corpse. You don’t get a great first impression of Maggy, because for some reason she dawdles around a dodgy crime scene in order to fleece a body, as you, the reader, scream at her to run. She’s caught by the Inquestors and becomes the main suspect in the murder of the Meridian, a chain of events that leads her into a conspiracy, hiding, and the seeds of a revolution.
Beyond an irritating first meeting, Maggy is a solid character. She’s tenacious, authentic, and has a great accent. Pang’s done a fantastic job of crafting a character who feels like a person. There’s hints of Vin Venture in her, from Sanderson’s sprawling epic Mistborn series, another fantastic character; Maggy is really what drove my enjoyment of Magpie’s Song, alongside hints of a mythology surrounding IronHeart, a dragon, which I hope will feature more prominently in the subsequent books. The plot itself was not particularly engaging, it’s messy and complicated and meandering, but Pang does know how to write an impactful scene. At one point I felt a couple of tears in my eyes.
Magpie’s Song was all about the main character for me, and I revelled in feeling a similar vibe to Sanderson’s Mistborn books. Pang really works the dystopia/steampunk vibe, even if the plot is lacking.