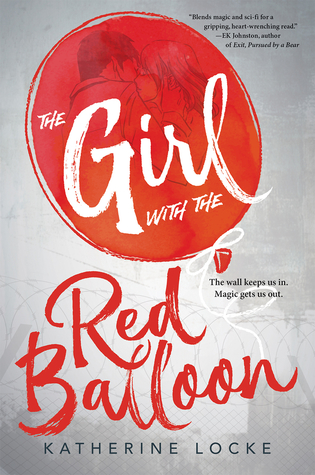 We are strange, sometimes, in the ways we choose to bear witness

When sixteen-year-old Ellie Baum accidentally time-travels via red balloon to 1988 East Berlin, she’s caught up in a conspiracy of history and magic. She meets members of an underground guild in East Berlin who use balloons and magic to help people escape over the Wall—but even to the balloon makers, Ellie’s time travel is a mystery. When it becomes clear that someone is using dark magic to change history, Ellie must risk everything—including her only way home—to stop the process.

I wouldn’t call myself a history nerd, but I would like to think that I have a reasonable understanding of a good chunk of European history. The Iron Curtain and the Berlin Wall, however, have drifted under my radar – possibly because I’ve never been to Berlin but also perhaps because it’s so recent, more recent than I had thought, such that it is less likely to become a dinner conversation and is more of a hushed memory. The Girl With The Red Balloon is a beautifully written and magical (in more ways than one) novel that I implore you to read.

A new language forming from her mouth, even as her hands wrote out an equally strange one and made magic of it

It’s actually quite a short novel, yet it packs an emotional punch and spans three time periods. We have Ellie Baum, a sixteen year old girl who lives in the present, or at least she did; on a school trip to Berlin, Ellie grabs hold of a red balloon in order to pose in a photograph for her grandad who claims that a balloon helped him escape the concentration camps during WWII, and is transported to East Berlin, 1988. There she meets Kai and Mitzi, who recognise the balloon she is holding and get her somewhere safe; after all, East Berlin at night with rudimentary German at best and no papers is a dangerous place.
Kai and Mitzi are Runners. They work for two, for want of a better word, magicians who crafts balloons with mathematics and blood that can carry people over the wall. Runners keep the passengers safe beforehand and essentially do all of the grunt work, but something is going wrong: time travellers are turning up dead, red balloons clutched in hand, and Kai’s sure he’s being watched. This main story is interrupted and bound together by a story set in 1941, that of a young Jewish boy called Benno in Lodz Ghetto. The plot itself is captivating, winding together stories of hope, of history, of magic, of death, of racism (Kai is a dark-skinned Roma), of sexuality (Mitzi is gay), and of family.

“Magic and balloons,” I whispered, shivering from the cold and the dark. “And Walls and time”

The characters are also fantastic and the three voices of the book, Ellie, Kai, and Benno, are all easily distinguishable. Understandably, Ellie spends a fair amount of the start of the book in states of shock and making a few stupid decisions, but she is a soft, loving girl who I was fond of. Kai is driven by a desire to protect his younger sister, Sabina, who is being hunted by various people because of the magic in her veins. Then we have Mitzi, who I really wish we had more of. I was sensitive to and moved by Benno’s story and saw how it was necessary to the narrative, but I did find it disrupted the flow, to flick between 1941 and 1988 constantly, and I think I would have rather the book focused specifically on the Berlin Wall by replacing Benno’s narrative with bits by Mitzi. My other complaint is that I thought that the ending was a bit of a cop-out: if we had had another couple of chapters, the book could have well been wrapped up as an amazing stand-alone.
Overall, I highly recommend The Girl With The Red Balloon to those who might not normally read historical books, to those, like me, who want to explore a slightly different area of German history, and to those that love an inventive, magical plot.
My thanks to Netgalley, the publisher, and the author for an ARC of this book