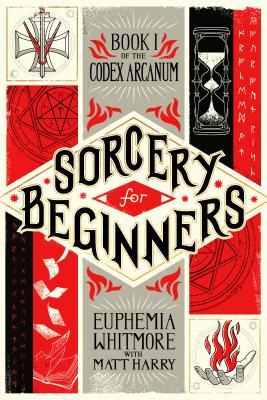 “We conversed for five minutes; now you wish for me to explain the meaning of your life? I am a bookseller.”

Five-hundred years ago, magic began to fade from the world. Combustion engines and computers took the place of enchanted plows and spell books. Sorcerers were hunted almost to extinction. Science became the primary system of belief, and the secrets of spell-casting were forgotten … until now.

Written by arcane arts preservationist and elite mage Euphemia Whitmore (along with her ordinary civilian aide Matt Harry), Sorcery for Beginners is the true how-to manual for returning magic to an uninspired world. It’s also the story of Owen Macready, a seemingly average 13-year-old who finds himself drawn into a centuries-long secret war when he uses this book to take on a school bully. But when Owen’s spell casting draws the attention of a ruthless millionaire and a secret society of anti-magic mercenaries, he must decide how much he’s willing to risk to keep magic alive in the world.

I always try to switch my reading genres up, to keep me on my toes. So I decided it was time for a more fun, children’s novel. I was a big fan of Flanagan’s Ranger’s Apprentice series and Cresswell’s How To Train A Dragon books, and Sorcery for Beginners looked like it provided a mix of the teenager’s-journery-to-becoming-competant-ranger/magician and fun illustrations. This book makes fantastic use of layout but it drags on a bit too long and the ending is rather unsatisfying.

You see, Owen had learned in his thirteen years that being ordinary was far easier than being extraordinary

This book is set up in the form of a textbook (it’s more fun than it sounds, I swear!) to teach a beginner magic, and it does so by conveying the story of young Owen Macready, sorcery initiate. The book uses textboxes and footnotes to add information, to avoid the story becoming too bogged-down in details, or fun little side points. For UK students, an apt comparison might be those CGP science revision guides that are hilarious. Owen is thirteen and his mother has left him and his dad to pursue wildlife conservation abroad; hurt and angry, Owen accepts a spellbook from a weird woman in a bookstore he can never find again on the promise that it will eventually teach him a spell to re-write history. But that’s only if he can do all the spells before it and keep the book away from the Euclideans, a group which opposes magic in all forms.

An example of a spell page from the book (it almost makes you want to try it out yourself)
Owen is having marvellous fun until he uses a spell of mending for a rather unintended use: sealing the eyes of a bully shut. Unfortunately, said bully’s father is a sort of mafia-mob figure who makes Owen’s life difficult in all sorts of normal, tricksy mortal ways. At least, until he teams up with the Euclideans so he can get hold of the spellbook and use it to train an army of children (for only children can learn magic, you see) to take over the world… All rather heinous and it’s really quite amusing. Owen is a great character, a real thirteen year old boy and not really Harry Potter like at all, and his band of friends is varied and funny.
I was actually ready to rate this book four stars, but I got to about 85% and set the book down for a week. If you can be that close to the end and not be bothered to finish (I wasn’t really busy), then clearly something is lacking. Yes, the book is clever and amusing and the illustrations are fantastic, but it also left me with a lot of unfinished questions for a standalone, particularly about this magical war, and there was no real sense of urgency because you knew exactly what was going to happen.
My thanks to Netgalley, the publisher, and the author for an ARC of this book