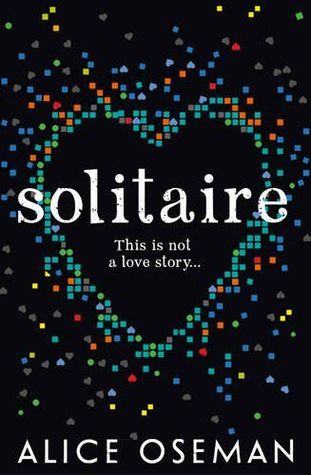 My name is Tori Spring. I like to sleep and I like to blog. Last year – before all that stuff with Charlie and before I had to face the harsh realities of A-Levels and university applications and the fact that one day I really will have to start talking to people – I had friends. Things were very different, I guess, but that’s all over now.
Now there’s Solitaire. And Michael Holden. I don’t know what Solitaire are trying to do, and I don’t care about Michael Holden. I really don’t.

Part of me doesn’t even believe that Solitaire was written by the same author as Radio Silence, a book which I loved and gave five stars. Solitaire was Oseman’s debut novel and man, it really shows; from the cringeworthy tagline “this is not a love story…” to cringeworthy main character who is a self-described introverted pessimist who hates “the fakers” and “doesn’t care about anything” to the predictable plot, Solitaire is a rough read. I thoroughly recommend that readers avoid this one entirely and go and pick up Radio Silence, a much more impressive book that works along similar themes and has an introverted blog-loving main character.

“As far as I’m concerned, I came out of the womb spouting cynicism and wishing for rain”

Tori Spring doesn’t care about anything. This girl is really miserable and no one seems to really notice; it absolutely seemed like she had clinical depression, as she spends most weekends just lying in bed aimlessly, not caring about anyone or anything, and “ironically joking” about wanting to die everything three pages. This is never really addressed properly, worryingly, as I would seriously recommend that anyone who feels like Tori does speaks to a medical professional. That aside, she’s also incredibly annoying, says “It’s funny because it’s true” in virtually every conversation and drinks an insane amount of Diet Lemonade.
Oseman has really tried way too hard to make Tori relatable to the blogger girl. Tori runs her own blog entitled “chronic-pessimist” which really says all you need to know: she posts a lot about how much she doesn’t care about anything, how she might be better off dead, and how school is lame and all her “friends” are hella fake. The side characters aren’t much better; we have the new boy in school, Michael Holden who is very variable in personality, who keeps running into Tori and desperately wants to be her friend. Obviously, Tori doesn’t care about him. Then there’s Tori’s best friend Becky who is guy obsessed and has “changed” ever since they got into sixth form; Becky is pretty boring and unimportant until the end, where she becomes a little bit badass. The only side character I really liked is Tori’s brother Charlie.

The plot is a mix of bizarre and predictable. Tori’s school begins to be plagued by pranksters calling themselves Solitaire and running a mysterious blog. Obviously, Tori doesn’t care about this either, but Michael seems obsessed. As the pranks get worse and worse, Tori becomes more concerned with what Solitaire are doing and whether people are going to be hurt; weaving alongside this is a subplot involving her younger brother, Charlie. The whole Solitaire business is fairly predictable, I was pretty sure I’d figured out the suspect and the motive within the first fifty pages, and there’s a lot of page time devoted to Tori’s daily school life.
Essentially, this book is a pretty depressing read that is not helped by the plot, and I’d recommend to anyone that thinks Solitaire sounds interesting to go and pick up Oseman’s other book Radio Silence instead.