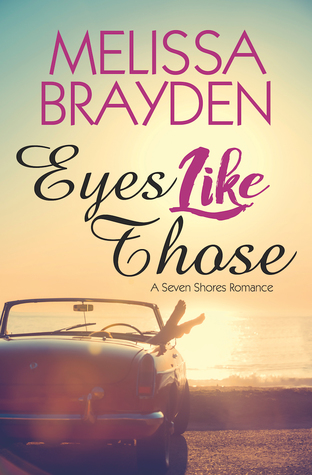 Isabel Chase was right where she was supposed to be

Isabel Chase is reeling. She’s just been offered her dream job as a staff writer on one of the hottest shows on television and quickly trades in the comfort of New England for sun, sand, and everything Hollywood. Taylor Andrews is at the top of her career. Everything she touches turns to gold and the studios know it.

Ever since devouring Brayden’s last novel Strawberry Summer I’ve been itching to get my grubby little book-hands on anything else by her. Eyes Like Those is sweet, sexy, and the two main character’s have a lot of chemistry, but I found the plot a bit lacking in originality and it just didn’t draw me in the way Strawberry Summer did.

she’d pretty much auction off her soul for the chance. Cheap too. She’d Craiglist the sucker

Isabel Chase wants to be a television script-writer but it’s a hard industry to break into. Meanwhile Taylor Andrews’ career is flying high and everything is finally going right for her – except for her ill-advised relationship with the lead actress on her show, who doesn’t seem to quite get the fact that she’s been dumped. When Isabel is brought on as the newest staff writer, they’re immediately attracted to each. Through ex-girlfriend’s, Isabel’s feelings of insecurity at this being her first real writing gig, Taylor wanting her but her superior position holding her back, and Isabel’s moving to Hollywood and making new friends, their romance winds it’s way in a long, slow-burning manner through the book.

Eyes Like Those is absolutely an enjoyable book. It’s reasonably light, fluffy, and I never felt like I was about to cry. Others have compared it to Brayden’s SoHo Loft series, which I haven’t read. It’s the first book in a series, so it isn’t entirely self-contained and the ending is a little incomplete. I loved Taylor straight from page one: she’s a woman with a career that she loves, but who is constantly fighting the powers-that-be, and struggling with her own baggage. She’s insecure in her own way and has a dog that she loves. But the book is more from the point of view of Isabel, who is palatable enough but become a bit annoying to me; she began to feel like a bit of a caricature of a spunky, sassy, small-town girl who’s moved to a big city. But Brayden is a woman who can make a cliche work, so I just rolled with it.

She laughed. “You call your boyfriend Fat Tony?” Clearly Isabel was pinging in the wrong direction today. “I don’t. But I call my cat Fat Tony”

So what failed to spark for me? It’s a mixture of a few minor problems: towards the end of the book I found Isabel and Taylor weren’t so distinct, both strong-willed, defiant women who loved passionately; then there was the relationship problems, the ups and downs of their love journey, that were quite predictable – relationship professionally not work-viable, a jealous and slightly insane ex-girlfriend; and finally the girls that Isabel lives with weren’t really properly fleshed out – they were important enough to warrant backstories, but never really felt like an important part of the book.

So maybe the book is a bit formulaic? But honestly, it really didn’t matter too much. The writing is beautiful, the main characters solid, and I absolutely loved the setting: the TV writing process is never something I’ve given much thought to, and it was fascinating. I have no idea if this book gives an accurate portrayal, but it worked so well! If you are a fan of Brayden, do not hesitate to pick this one up.