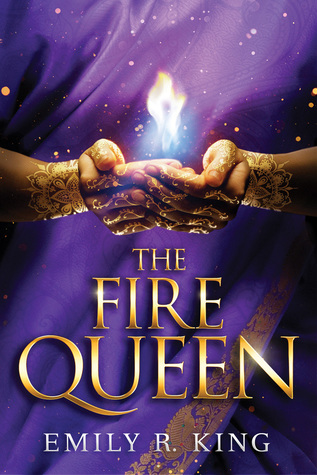 “I made myself a champion. I won’t make the same mistake twice”

Though the tyrant rajah she was forced to marry is dead, Kalinda’s troubles are far from over.  Kalinda has the allegiance of Captain Deven Naik, her guard and beloved, imprisoned for treason and stripped of command. With the empire at war, their best hope is to find Prince Ashwin, the rajah’s son, who has promised Deven’s freedom on one condition: that Kalinda will fight and defeat three formidable opponents.
With both the responsibility to protect her people and the fate of those she loves weighing heavily upon her, Kalinda is forced again to compete. She must test the limits of her fire powers and her hard-won wisdom. But will that be enough to unite the empire without sacrificing all she holds dear?

Without being facetious, the best thing about this book is the cover. It’s lovely! Everything else … meh. I felt the same way after finishing this book as I did after finishing Frostblood: like I’ve just read several hundred pages where, technically, lots of stuff is going on, but I just didn’t care about any of it and now feel a bit weird. I had virtually zero emotional reaction to anything in this book, which is weird and unfortunate because I rather enjoyed The Hundredth Queen.


Despair crawls far inside me and expands into my bones. We are lost to the evernight

The Fire Queen picks up with Kalinda, Deven, Yatin, Natesa and a few others on the run. The bhuta (magic people) warlord has seized the capital of the Empire, the rajah is dead by Kalinda’s hand, and they are seeking the Prince of the Empire, Rajah Tarek’s son Ashwin. When they find him, they all travel to a neighbouring kingdom to seek aid in overthrowing the warlord and reclaiming the empire for Ashwin. The Sultan offers aid willingly. The catch? Kalinda has to compete against three other women for the “honour” of wedding Prince Ashwin – this doesn’t really make much sense, but basically the Sultan wants his chosen woman to win so he can get political power. Not sure why he didn’t just demand that Ashwin marries someone from his family in return for an army, but hey ho.

In the end, this book has pretty much the same plot as the last one. Kalinda learns more about her fire powers, Kalinda competes against other women in tests of skill and strength, some of these women are clever and others are mean, Kalinda meets a new man who makes her doubt everything she thought was true. Eh. It’s just repetitive and boring and full of a love triangle. The chapters from Deven’s perspective aren’t that much more interesting; Deven is kept in a camp along with the other soldiers who served the Rajah, and he’s not very popular on account of the whole traitor thing. Ashwin is not particularly interesting and really only serves for Kalinda to have conflict between liking this guy but also being irrevocably reminded of Tarek.

Kali is a shooting star. I do not know how much longer I can keep her close without burning up in her wake

The setting is also rather bland. There’s deserts and jungle. I believe the people and their culture is loosely based on Sumer and the Sumerians, but it’s a pretty flavourless characterisation and they are essentially “desert people who like magic except for those nasty fire ones“. There’s a bit of cool mythology involving demons and such threaded in, which I quite liked, in terms of positives. There’s also two sweet new characters, Opal and Rohan, who are children and Galers who travel using paragliders, which is kinda cool.

I didn’t really find anything in this book for me to invest in emotionally. Some of the writing was quite nice and poetic, but it wasn’t enough for me to enjoy The Fire Queen. I would still recommend the first book in the series, but perhaps suggest that people don’t continue.