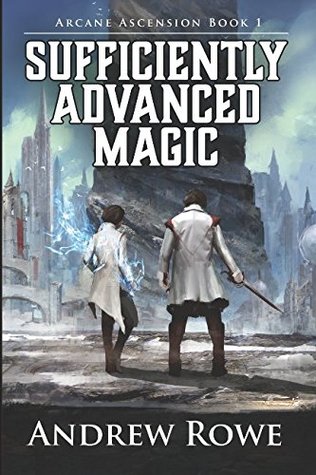 Five years ago, Corin Cadence’s brother entered the Serpent Spire — a colossal tower with ever-shifting rooms, traps, and monsters. Those who survive the spire’s trials return home with an attunement: a mark granting the bearer magical powers. According to legend, those few who reach the top of the tower will be granted a boon by the spire’s goddess.

He never returned. Now, it’s Corin’s turn. He’s headed to the top floor, on a mission to meet the goddess.

When I was a great deal younger I spent a reasonable amount of time devouring books and manga of the LitRPG genre – the most famous of which might be Sword Art Online, The Tower of God, and 1/2 Prince. Essentially, these are books based either literally around people in a game or a world that functions like an RPG; typically these feature dungeons, levelling up, magic, trading, forging weapons, and parties (the dangerous, monster fighting kind).

First off, I bought Sufficiently Advanced Magic on audiobook and the narration was excellent (if very strongly American, which I soon got into). As with all male narrators, the female character’s voices are a bit gruff and hoarse sounding, but that is easily overlooked (the opposite occurs with female narrators). I might actually recommend listening to the book over reading it – our main character Corin Cadence is incredibly curious about literally everything and we spend a lot of time in his head, listening to the “I must remember to research that later” and the continuous “I wonder if I could…” commentary is suited to being spoken. I could imagine skimming a little if I was reading.

For the future, please promise me you will not make any life-altering oaths in order to influence my love life

But on with the review! Sufficiently Advanced Magic is a fantastic example of quality, well-written LitRPG (in a genre saturated by some not-great works featuring power fantasy characters). It’s complex, has a varied and excellent cast, and I adored all the RPG elements: puzzles to solve, dungeons to explore, powers to level up, and my absolute favourite trope: magic school.

Corin Cadence is the son of a powerful family. He stands before the Spire ready to take his Judgement, years after his older brother took his and never returned from the tower, presumably consumed by one of the beasts that lurk within. One must enter and climb the tower alone to earn one of six attunements that function sort of like character classes; for example, there is a Guardian attunement that grants powers of endurance and protection. Each room in the Spire is a test by the Goddess, built to filter out the unworthy and send them plummeting to their deaths or to be eaten by beasts. Each puzzle is inventive and fascinating! They were all so awesome and the very prospect of such a trial is really kind of terrifying.

There is no fencing term I’m aware of for drawing a pistol and shooting your opponent in the face, but that was what it felt like when I heard his final words

The synopsis of this book makes it sound as though the entirety of the book takes place in the Spire. This is not so! The bulk of the book takes place in a magic school, built to train those who have survived their tests and gained an attunement to use their skills properly. Not to provide spoilers, but Corin gains an attunement that is at odds with his father’s expectations and his own desire to climb to the very top of the Spire to meet with the Goddess and ask for the return of his brother. I adore the magic school trope (I reckon everyone who grew up on Harry Potter does) and this is where the cast really gets fleshed out – there’s Corin’s half-sister Sarah, the mysterious foreign student on the floor above, some of Corin’s childhood friends, and a feisty farmer girl.

Sufficiently Advanced Magic is a long and complicated book. The magic system is so complex, it’s like something Brandon Sanderson might have dreamt up (the highest compliment I can pay to an author), but it’s so worth it. I’ve never really read anything quite like it, and my only gripe is that sometimes Corin’s stream of inner thoughts can be a touch grating and I really, really wanted to know more about the gods and the mystery of the Spire!