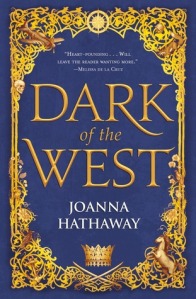 Aurelia Isendare is a princess of a small kingdom in the North, raised in privilege but shielded from politics as her brother prepares to step up to the throne. Halfway around the world, Athan Dakar, the youngest son of a ruthless general, is a fighter pilot longing for a life away from the front lines. When Athan’s mother is shot and killed, his father is convinced it’s the work of his old rival, the Queen of Etania—Aurelia’s mother.

Dark of the West confused me. It felt like a clever book, full of plots and intrigue, but I felt lost for most of it. There was too much going on, too many betrayals and a little bit too pretentious.

Somewhere, the forest is burning, my father is raging, and the kingdom staggers

Aurelia Isendare is a princess of the Kingdom of Etania. Etania is one of the northern kingdoms that has a complicated relationship with the newly forged in blood Savient. Savient is ruled by the general, a tricky, bloodthirsty man with secrets in his past. Athan Dakar is his third son, training to be a pilot who does not want to follow his brothers into war. When his mother is shot and killed in the street, Athan is told that it is the work of Aurelia’s mother, who has a past with the general. Meanwhile in the south a revolution is brewing at the hands of a man rumoured dead – Seath – and he has ties to Aurelia’s mother and her country of birth.

When Savient takes a contingent to Etania Athan is ordered to get to know the princess. He thinks her arrogant and inexperienced. She thinks he is but a simple pilot and is charmed by his rogueish good looks, his piloting skills, and his flattery. The writing is elegant, if a little overworked, and I liked Athan and I loved that Hathaway chose to make him a pilot rather than a soldier. There’s some beautiful descriptions of his flying. Aurelia is a little more typical for a YA novel – a princess who doesn’t know very much, who likes to draw and spend time in the woods, who doesn’t want to get married. You’ve heard it all before.

There was me and there was him and now there’s only me. The loneliness of that startles me

Dark of the West definitely had potential. Like I said, I loved Athan and I liked the prose. But the book was incredibly slow and was too complicated for it’s own good. Etania’s royalty and court has far too many main characters to keep track of, I had no idea what was going on with Aurelia’s brother or mother or slightly creepy suitor. There’s political machinations abound. I also felt very confused about the setting – there’s advanced planes, machine guns, mentions of alarm clocks and screens, but nobody has a phone. The setting felt maybe WWII, but it was never quite clear.

Dark of the West tries really hard, perhaps too much. It is elegant and interesting and has elements of uniqueness, but it is also too complicated and Aurelia is a bit boring.

My thanks to Netgalley, the author, and the publisher for an ARC of Dark of the West