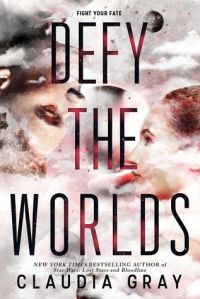 Always sacrifice. Always duty. Always resignation. For a planet at war, Noemi sometimes thinks, Genesis seems to have forgotten how to fight

Noemi Vidal dreams of traveling through the stars one more time. And when a deadly plague arrives on Genesis, Noemi gets her chance. On the run to avoid his depraved creator’s clutches, Abel believes he’s said good-bye to Noemi for the last time. After all, the entire universe stands between them…

Read my review of the first book in this series: Defy the Stars.

Defy the Worlds picks up from where Defy the Stars left off: Noemi Vidal returns to her world of Genesis, and rogue robot Abel has escaped the clutches of his creator Burton Mansfield and is on the run. They’ve said their heartfelt farewells, but the universe isn’t done with the two of them yet!

Noemi convinces the council to allow her to leave Genesis when a plague is weaponised against her people. She seeks a cure, but Mansfield wants his robot back and this is all some sort of evil dastardly plan to get Abel back, and Noemi is captured as bait. An epic chase ensues, complete with a starship voyage for the ultra rich, a creepy ass child, and the continuation of the romance that totally weirded me out in the first book.

Defy the Worlds is definitely more of an “Abel book”, which I found a shame since I definitely have a strong preference for Noemi as a character. But I definitely think some readers will love this focus on Abel: his growth beyond the robot that thoughtlessly obeyed his creator and his Directive One, his unceasing loyalty, and his pursuit of Noemi across the galaxies.

I loved the drama of the book and its scope. I loved the extravagance of everything, the craziness of the plots from ransoms to plagues to elaborate cons of rich people. But Defy the Worlds just didn’t wow me as much as Defy the Stars, and it is hard for me to put my finger on quite why. Part of it is just that I’m not a fan of the romance, and a love of the romance is, perhaps, required to appreciate the book when the action lulls.

My thanks to Netgalley, the publisher, and the author for an ARC of Defy the Worlds