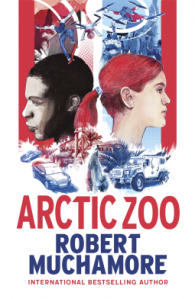 He felt every bit an awkward giant. Fifteen years old and seven thousand kilometres from anyone who loved him.

Georgia gets straight As at school, writes essays for fun, has been placed first in twenty-six drone races and has a serious addiction to buying Japanese stationery. She plans to follow her older sister Sophie and become a doctor, but her worldview is shattered when Sophie commits suicide.

Julius lives in Ondo, a Nigerian state where half the population lives on less than a dollar a day. But he isn’t one of them. He finds refuge in a derelict zoo with best friend Duke, but as the two of them grow close, the world outside becomes more and more hostile.

Robert Muchamore writes fantastic YA novels about contemporary topics concerning teenagers: racism, sexuality, the wealth gap, mental health, and family. Arctic Zoo is no different; it is bold and ambitious and diverse, but it also felt a little disjointed. I am a huge fan of Muchamore’s CHERUB series and I was thrilled to read something with his characteristic style that still managed to feel totally new with original characters.

For Duke, seeing Julius skate was like going to a family party and seeing your grandma start breakdancing

Georgia is a British teenager who races drones because it makes her dad happy and spends her money on fancy stationary. Her world is turned upside down when her sister commits suicide and in an attempt to feel closer to her, Georgia becomes involved in political activism. On the flipside, Julius lives in Nigeria. His family is fabulously wealthy; his mother is a business tycoon and the power behind her brother’s political campaign. But there’s one thing she won’t forgive: having a gay son.

Arctic Zoo felt like two books in one. The book begins with the two teens in a British mental health unit and then flashes backwards in time to show how they got there. We alternate chapters between Georgia and Julius and for 90% of the book the two have nothing to do with each other. Sure, their stories are linked via themes of politics, power, family, and discovering yourself, but I felt that this could have easily been split into two books without losing very much.

It had all made sense. It had all been leading to something. Georgia had never known precisely what the something way, but she’d believed hard work and A-stars would take her to better places

Both characters are very compelling. Georgia withdraws from her parents and gets more involved with her sister’s boyfriend and his political protests. One day she joins a street march and ends up getting photographed as she leaps over a barricade whilst stuff is being smashed around her. This photograph makes the front cover of a bunch of newspapers and suddenly Georgia becomes a kind of public figure, offered a bunch of interviews and modelling contracts. I found this a touch far-fetched, but rolled with it anyway.

Julius struggles to get along with his brothers, constantly seen as the odd one out. He withdraws and spends more and more time with his best friend Duke, an openly out young gay man whose father is a vocal critic of Julius’ family. Meanwhile, tensions are rising in Ondo as political campaigns become more and more violent. Julius is a very sympathetic character and his journey is an interesting one – I was definitely curious how he would go from a wealthy family in Nigeria to being detained in Britain.

Like I said, both of their stories are very compelling in their own ways and touch on some important issues. I think the book suffered from having Julius and Georgia as very separate characters, such that the book felt like two smaller books in one. But I definitely enjoyed how Muchamore has written something very different to his CHERUB books whilst still being about teenagers and extremely relevant.

My thanks to Netgalley, the publisher, and the author for an ARC of Arctic Zoo.