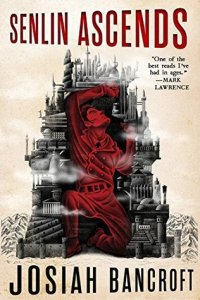 “It is easier to accept who you’ve become than to recollect who you were.”

Soon after arriving for his honeymoon at the Tower, the mild-mannered headmaster of a small village school, Thomas Senlin, gets separated from his wife, Marya, in the overwhelming swarm of tourists, residents, and miscreants.

I love books about towers where people enter the Tower with a quest to get to the top where there will be a wish-granting deity/treasure/whatever. Please see the LitRPG book Sufficiently Advanced Magic and the manhwa Tower of God for examples. I’m a real sucker for this trope, lord knows why, but for this reason I picked up Senlin Ascends.

The book tells the tale of Thomas Senlin, newly married to Marya. The pair go on their honeymoon to the infamous Tower of Babel where each floor is its own marvel, where within five minutes Senlin loses his wife. He enters into the tower to find her, but instead he only finds himself change from a quiet headmaster to a man of reluctant action as morality and the world he thought he knew blurs around him.

This book is cool. Characters revolve in and out as Senlin travels. We spend fifty pages with someone here, another fifty with someone else. Senlin Ascends documents a tapestry of lives, interwoven and drawn apart. With each person, Senlin changes. The book drew me in (I turned down the pub to go read more, a rare occurrence!) and fascinated me.

“I’m suspicious of people who are certain.”

It only didn’t reach five stars because some of characters really rubbed me the wrong way, particular how Marya is viewed: she was Senlin’s student and she becomes lost because he’s too embarrassed to shop for underwear with her. Women in Senlin Ascends are mostly viewed as whores (even if they aren’t) and whilst there are several great female characters – Edith, Voleta, Iren – women are not treated well. Even the three good women are framed in terms of sexuality: Iren is too brutish to be considered sexual, Voleta is a beautiful young reluctant exotic dancer, and Edith represents some kind of temptation to Senlin’s marriage. It’s a bit exhausting.

I loved the tale that Senlin Ascends weaves and the way that Senlin himself develops and changes over the book. I just wish that there was a bit more effort put into how all of the women are viewed. I have high hopes for the next book.