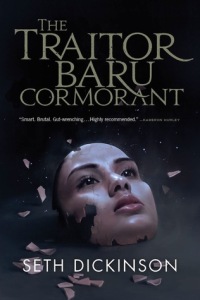 “You are a word, Baru Cormorant, a mark, and the mark says: you, Aurdwynn, you are ours.”

“I am Baru Cormorant,” she protested, “accountant, and I earned my place by merit. I am a mark of nothing except myself.”

The Empire of Masks is coming, armed with coin and ink, doctrine and compass, soap and lies. They’ll conquer Baru’s island, rewrite her culture, criminalize her customs, and dispose of one of her fathers. But Baru is patient. She’ll swallow her hate, prove her talent, and join the Masquerade. She will learn the secrets of empire. She’ll be exactly what they need. And she’ll claw her way high enough up the rungs of power to set her people free.

I ADORED The Traitor Baru Cormorant. First of all, what an absolute banger of a title. When I bought it on Amazon, it was just titled “The Traitor” which is nowhere near as good, because if you call your main character something like Baru Cormorant you should brag about that. What a name.

“These books were Baru’s spyglass, her map, her sword, her edict.”

The Traitor Baru Cormorant is a truly epic story, spanning many years. Baru is a curious girl growing up an island that is later invaded by the Masquerade, or the Empire of Masks. The bring with them plumbing and healthcare and education, but also eugenics, homophobia, and strong (and pretty disgusting) ideas about what makes a perfect society. Baru excels in their schooling system and in her late teens is given the respectable position of Imperial Accountant in the wintery and desolate country of Aurdwynn.

It is a well known fact that Aurdwynn cannot be ruled. The country is fractured into dukedoms, the last two accountants were murdered, and there is a weave of lies, schemes, and rebellion at work in the court. Baru wants to set her home country free and she aspires to do so by taking down the Masquerade from within. How far will she go to do so? What will she give up? What will she become?

“There was rebellion in the Federated Province of Aurdwynn. And the first storm of autumn howled in off the Ashen Sea.”

I loved this book. I loved Baru. I loved the woman she grows to love, Tain Hu. I loved the imagery and have over forty highlights in my Kindle for the beautiful prose. There are so many lovely sentences I couldn’t decide which ones to put in this review. The one complaint I have is how “zoomed out” the narration style is. It enables the author to paint broad brushstrokes of Baru’s life, the vast political movements, the epic battles, but it impairs the emotional connection between the reader and the characters. Everything is important and there are no words for the little moments, the things that Baru feels and loves. I felt like I was on the outside looking in.

“Leave the Masquerade the keeps and the roads, the sewers and the ports. They are summer lambs. It will be winter soon, and we will be as wolves.”

I would describe this book as: badass lesbian woman Baru Cormorant fights COLONIALISM and seeks REVENGE using the power of ACCOUNTANCY. If that doesn’t suck you in, then this book ain’t for you.