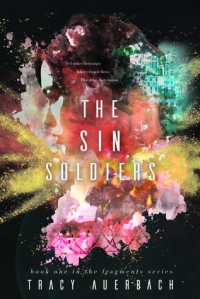 This was where all the magic happened; where ordinary people were transformed into slaves and monsters

Red compound makes them angry. Yellow exhausts them. Blue drives them into a state of ravenous addiction. The thief Kai knows about the chemically controlled soldiers of the Eastern forces and their savage, deadly nature. When a robbery attempt at Club Seven goes wrong, Kai is captured by a handler and his bestial soldier-boy. She wakes up inside the military base with no idea what happened to her twin brother, Dex.

The Sin Soldiers has a cool concept and it hooked me at the start, but unlikeable characters and a confusing setting left me unsatisfied.

Kai still held out hope somewhere in the back of her mind that some way, somehow, the compound wouldn’t work on her. Not her.

In Kai’s world, soldiers are injected with crystal compounds to give them certain traits that are useful in waging war. Captured and imprisoned for the crime of theft, Kai is injected with the blue compound. Red for anger. Blue for addiction. Yellow for sedation. This concept hooked me in right at the start because what a cool idea. And it starts off really well. Kai is surrounded by other drugged teenagers, scared and wondering what happened to her twin brother, Dex, unable to control her growing food addiction that the military is using to manipulate her.

But then it devolved into YA tropes that I had thought (and hoped) had long died. Mostly I’m talking about the hot, brooding, angry guy who is a bit of an enigma and a bully. But oh! It turns out he’s only being a bully because he’s in pain and misunderstood and trying to protect Kai from himself. By being a dick. And apparently that’s very attractive. Yeah no.

It wasn’t like she had thought he was a nice guy or anything, but for a little while, he hadn’t seemed like the monster he was

Then there was also the fact that the world didn’t really make sense. Who is letting these people take all their children? Why is everyone starving? How do these crystals actually work? The end section only inspired more questions, and I got the impression that certain events were only happening because the author wanted there to be a twist, rather than being a natural product of what had already happened.

The Sin Soldiers had me at the start and then lost me along the way. I felt like this book would have been better received back in 2012, when everyone was eager for bad boy interests and Hunger Games-esque apocalyptic worlds.

My thanks to Netgalley, the publisher, and the author for an ARC of The Sin Soldiers.