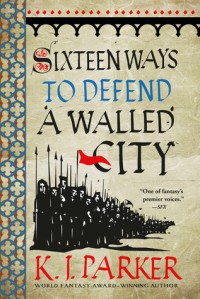 I fix broken people with things, with stuff; with tricks, lies, devices. I’m resourceful and ingenious. I don’t confront, I avoid; and one of the things I do my best to avoid is justice, and another one is death.

This is the story of Orhan, son of Siyyah Doctus Felix Praeclarissimus, and his history of the Great Siege, written down so that the deeds and sufferings of great men may never be forgotten.

I’ve had my eye on Sixteen Ways to Defend a Walled City for a little while now, and I finally took the plunge and bought it during an ill-advised shopping spree at Waterstones. Seriously. I’d just been paid and I went and picked up seven books, including two hardbacks. I’ve never done that. Anyhow, this book was great.

My enemies have always come through for me, and I owe them everything.

Orhan is an engineer. A bridge-builder, to be precise. He’s got the wrong background and he’s got the wrong skin colour, but somehow he’s risen up the ranks until he becomes the Colonel of Engineers, commanding the bridge-builders. Then it all goes tits up when the Walled City is laid under siege and Orhan seems to be the highest ranking officer around. Shame this is way above his head.

Parker’s books are typically about logistics, chains of command, and the realities of warfare. This book is no different. I love scenarios where our protagonist is up against all the odds and then pulls out something clever. Orhan does that, but the consequences of what he does are real and come with a body count. This book is clever. It’s cunning. And it is sad, and I could never quite tell who was in the right.

The world building here has a light hand. I don’t know if this is a standalone, or part of an established universe, but names and places and races are dropped in without much explanation. It was a little confusing, but this minor nitpick was heavily outweighed by the delightful wry humour, the trickery, and the weight of the story that managed to be both entertaining and feel realistic.