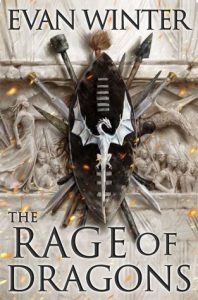 He would fight until he won or he died. There would be, he swore, no days without difficulty

The Omehi people have been fighting an unwinnable fight for almost two hundred years. The lucky ones are born gifted. Everyone else is fodder, destined to fight and die in the endless war. Young, gift-less Tau knows all this, and when those closest to him are brutally murdered, his grief swiftly turns to anger. Fixated on revenge, Tau dedicates himself to an unthinkable path. He’ll become the greatest swordsman to ever live, a man willing to die a hundred thousand times for the chance to kill the three who betrayed him.

The Rage of Dragons has been getting a good rep in book reviewing circles for its epicness, African-inspired setting, and readability. I’m here to offer a slightly controversial opinion: this book was okay.

Some people are born lucky. They are able to make themselves stronger, faster, bigger. The rarest can even call down dragons. Tau of the Omehi is not lucky. All he’s got is his determination not to be caught up in the war of his people, who sailed here years ago and have been fighting against the native population ever since. Tau wants to get out, find a nice girl, get married and settle down. A noble goal. I liked this about Tau, his unconventional (at least in terms of YA/adult fantasy novels) dream and his more gentle nature. Unfortunately, the book throws Tau down the path of violence anyway when his father is killed.

He decides to become THE GREATEST SOLDIER WHO EVER LIVED. Cue my eye roll please. He joins the militia, gets up super early and never sleeps, and becomes a great swordsman. To be honest, I thought the way that this was done reeked a bit too much of fantasy fulfilment and was a little bit, well, cringey. It was the book version of that scene in a movie where the character goes from skinny and weak to jacked and able to defeat anyone.

A dragon had been called, and someone would have to die

I found the setting both refreshing and confusing. Like other readers, I appreciated that the author drew on a variety of African cultures to create a setting that felt vibrant and new, with a fresh take on integrating magic into a society. But most of the time I felt confused. The society is hierarchical based on who has gifts and who doesn’t, fine. But then there’s the complicated history with the dragons, why Tau’s people have come to this island, why they are fighting the natives so viciously. I had a lot of questions and I didn’t find enough answers to satisfy me.

The Rage of Dragons is a long book and at times it definitely felt like it. I love a good fighting scene (and this book has them), but c’mon, there’s only so many I can read before I start yawning and checking the page count. I also found that it didn’t impact me much, emotionally speaking. Like any classic fantasy novel, it’s got some betrayals. Whilst I didn’t see them coming, I also didn’t much care due to the lack of fully fleshed out secondary characters. The Queen, for example, plays a large role plotwise, but gets scarcely a handful of words. More time is spent describing how pretty she is than on her speaking.

The Rage of Dragons didn’t wow me. It was entertaining in an indulging sort of way; I’ve definitely spent time daydreaming about being the best swordsman ever, taking down the system. But to be truly memorable, this book needed more depth, more character exploration, and less fight scenes.

My thanks to Netgalley, the publisher, and the author for an ARC of The Rage of Dragons.

One thought on “The Rage of Dragons, Evan Winter”