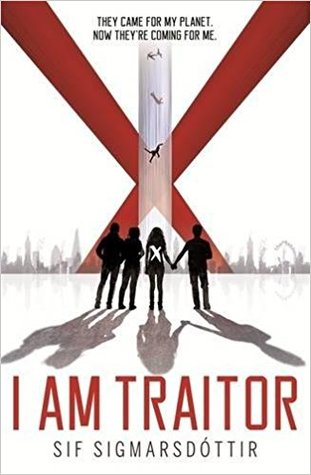 I was a traitor. I was a traitor to my country. I was a traitor to my people. I was a traitor to my planet
London has been targeted by extra-terrestrial life; large pipes fall from the sky, sucking teenagers up into a world that is entirely unimaginable. Amy Sullivan surrenders in a quest to save the teenage population. But nobody can prepare her for what’s on the other side of the pipes; a grim and gruelling dystopian world run a specialised government. In order to save the human race, she must literally fight the other species.
Then Amy meets Caesar, a boy who doesn’t seem entirely normal. Amy must decide what’s more important – saving planet Earth, or following her heart – wherever it might lead.

I’ve never read anything quite like I Am Traitor, it’s an imaginative book if nothing else. We have an alien invasion, teenagers being kidnapped, and a sense of foggy mystery that pervades the book so I never felt quite sure what was going on. Whilst interesting and keeps the reader on their toes, this also made it a very confusing and difficult read for me, not helped by the fact that several key elements of the book were not quite my thing.

First off, our main character Amy Sullivan is fourteen years old, a little younger than I was expecting. Amy is obsessed by the fact that she hasn’t had her first kiss (certainly not something I was concerned with at fourteen, or sixteen, or even eighteen…), I mean this is her go-to thought at any moment of danger, which became rather annoying. Other than this, Amy is an alright character but due to her age and interests I didn’t find her particularly relatable. Other than kissing boys, or the lack thereof, Amy’s chief concern is that Earth has been invaded by aliens and they are sucking teenagers up giant metal tubes to their spaceships.
This idea is really quite interesting and I wasn’t at all sure where this would go and what it would involve! Unfortunately, the direction that it took wasn’t really what I was hoping for: I Am Traitor focused on suspense, suspicion, and romance. It does get straight into the action, the aliens are already here, on Earth and taking teenagers, which is quite exciting, but Amy’s narrative is very confusing, especially at the beginning. It alternates between the present and Amy’s diary entries, but this isn’t very clearly marked, making for confused and difficult reading.

It’s funny how quickly your eyes get used to the dark. But the spirit … the spirit never gets used to being locked up

I’m not a massive fan of alien books anyway, but I found it hard to sink my teeth in I Am Traitor for a variety of reasons: the youth of the main cast, the romance element, the purposeful withholding of key information from the reader, and the overwhelming focus on the ~power of love~. Most of these reasons were merely down to personal preference and this might be a great book for an alien-loving younger reader, but as an adult I didn’t not enjoy it.
My thanks to Netgalley, the publisher, and the author for an ARC of this book